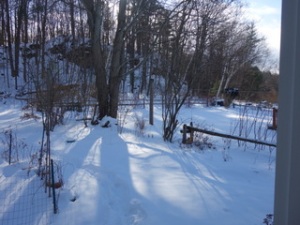 It is New Years Eve. Now ten days have passed since the solstice and the light is noticeably stronger and the days longer. New Years acknowledges and celebrates these visible, and felt, changes. This year the cold has settled in with renewed fierceness, giving emphasis to the adage, “The days lengthen and the cold strengthens.”

A few days ago Jennie and I joined friends to celebrate the life of a treasured friend who died unexpectedly on Christmas Eve. She was an artist of great skill and creativity, and a person who brought much light to the world. She will be sorely missed by many.

The funeral took place Tuesday afternoon at the synagogue. At some point during the service I noticed that the synagogue was filled with spirits. I’ve not been one who notices spirits readily when not trying, so I felt some surprise at perceiving their abundant presence. I guess I should not have been surprised given our friend’s deep love of life, fierce compassion, and profound spirituality.

In spite of the brutal cold there followed an outdoor burial at the Jewish cemetery. Jennie and one of our close friends were pallbearers, a gesture our  departed friend, a fierce and determined feminist, would surely have appreciated. It would have been good to see her laid carefully into the bosom of Mother Earth but, sadly, I felt the need to stay at the synagogue rather than try to deal with the intense cold which would have wrought havoc on my Post-Polio body.

On Christmas we had joined some of the same friends to celebrate another friend’s seventieth birthday. This has been an autumn for seventieth birthdays in my friendship circle, evidence of the deep desire for normalcy and forgetting that followed World War Two. We are repeatedly reminded that we who are now entering our eight decade are the incarnated hope of our parents and grandparents.

I’ve been reading Sherman Alexi’s autobiography: You don’t have to Say You Love Me. I’m not far into the book yet, just far enough to appreciate Alexi’s sharp wit and poignant memories. I have also come, already, to recognize a kindred traveler, someone who has also experienced the savage side of human behavior. I imagine he would agree with me that our children and step-children are our prayers for the future.

Later today we will spend time with dear friends. Hopefully, as we anticipate the coming year with its threats, challenges, and opportunities, we will make room for the past and those who prepared the way for our births, loving us long before we were born. May we remember that we are the prayers of past generations, and their hope for the future, and may we carry those hopes and prayers lightly into the future.