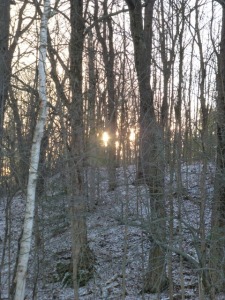 Yesterday we took down most of our Christmas decorations, including the small Nativity set which consists mostly of an array of animals, both wild and domestic, that surround a manger and child. The idea behind the tableau is the ancient circumpolar Indigenous knowing that the animals welcome us at birth, and support us throughout our lives.

Later, we read, what for us is a new children’s’ book, A Coyote Solstice Tale by Thomas King, with pictures by Gary Clement. A Coyote Solstice Tale is, as one might well expect of a tale from Thomas King, both heartbreaking and hilarious. The story turns on a little girl, who dressed as a reindeer, takes refuge from civilization by fleeing into the great forest. She trudges through the snow and cold til she shows up at Coyote’s door on the night of the Winter Solstice. Coyote and the other animals decide to help her find her way home.

Of course, there are subplots galore, one being the encroachment of “civilization” on the animal’s world. This is a central issue for both animals and the Indigenous people who have coevolved with them. This Christmas brought news of continued precipitous declines in reindeer and wild caribou populations, declines intimately linked to habitat destruction and climate change. We also heard more stories of governments around the world attempting to end the traditional lifeways of herding and nomadic peoples. Yet we hear almost nothing of the harm done to both people and animals when the ancient, coevolved, links between them are broken.

This rending apart of place and meaning extends to urbanized ideas about shamanism. A great deal has been written about spirit animals, guardians, and animal helpers in shamanic societies, and in Neoshamanic practice. Yet much of that literature decontextualizes the link between person and landscape/ecosystem. Traditionally, the animals who come to teach and support us are animals we might encounter during day-to-day subsistence activities, and on whom we are dependent. That is, we encounter, and to some extent, interact with the physical manifestation of those spirit beings in our daily lives. They may provide our food, clothing, and building materials, or shape the function of ecosystems; thus, our very lives depend upon them. As a result, we are likely to know their behaviors and predilections intimately.

We don’t so much depend on Coyote for our livelihoods as coexist with him/her. Coyote is, after all, very much like us humans. S/he lives in a community, intimately dependent upon many plants and animals s/he knows well. S/he cares for her children and the other individuals in the pack, and is curious, playful and resourceful. Coyote also lives close to us humans, and at times seems to be competing for resources with us. No wonder Coyote has become an important Trickster character in many cultures, as well as a problematic, if much loved, spirit guide.

Coyote, and the other spirit animals (and plants) remind us that the world is an interconnected web of being. Our actions toward the animals and plants, and one another, really do matter. There is only so much energy that can be distributed through our planet’s ecosystem, and a limited amount of biomass that can be maintained. When we forget this, we cause species to go extinct, locally or globally, and ecosystems to become radically unstable. There really is a link between our relationships to spirit beings and the way the planet works. This is ancient knowledge that apparently must be learned by each generation.

Here’s a snippet from the book:

Well he sat on the porch in his rocker

And he rocked as he tried to recall

If goodwill and peace could be purchased

For credit or cash at the mall.

Probably, thought Coyote, as he smiled and

That place had everything.