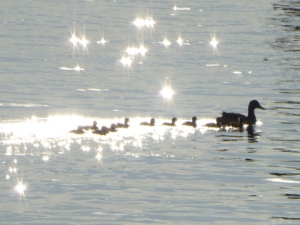 After another wet day, the sun is again shining, the sky clear and blue.

Over the past few days I’ve found myself in several conversations about the interweaving of the experience of being other, creativity, and social issues. These discussions have proven inspiring and hopeful. This morning I was going through the blogs I follow, and came upon two posts that addressed these themes, and simply demanded to be shared. Although each arises from the experience of the ethnic other, both speak to the human capacity for using life’s challenges as material for inspiration and creativity.

The first, from The Mix, was The Lesson of the Butterfly, and the Message of the Wind, a guest post by Carol. A. Hand.

At the moment, I am dealing with the challenges that always accompany innovation. For the past two weeks, when I wasn’t working outside on gardens, I was developing a new research class that began yesterday. (This is the main reason why I haven’t had a chance to read and respond to many blogs lately.)

In the process of conceptualizing the class, I reflected on the knowledge and skills that would be helpful to students in the future. Most research is built on what worked in the past in narrow clinical settings with little thought about the current socio-political context or broader future implications. I decided to try my own research experiment by testing out an experiential approach for teaching research that engages students in exploring the impact of climate change for vulnerable populations and the effectiveness of responses to recent disasters. (Duluth is still dealing with the consequences of torrential rains and flooding during June of 2012, so the implications of climate change are also very close to home.)

It took me many days to work out the basic framework and identify resources, but in essence, I’m sharing this discussion for two main reasons. First, I welcome any ideas and resources you want to share about climate change that would be helpful for me and my students. Second, it’s my way of trying to find an effective third alternative for dealing with the conflict that always accompanies paradigm shifts. Some administrators are not pleased by new ways of doing things. It is tempting for me to choose simplistically from the two most common responses to conflict: fight or flight. The third, to stand with integrity and compassion, is the path I need to work out through the process of writing. What does this mean in terms of practical actions? What past experiences can I draw from for clues?

The second was a post on Gaele Sobbot’s blog. The post, an in-depth interview with Australian Aboriginal writer, and Polio survivor, Gayle Kennedy, is entitled, If You Didn’t Laugh, You’s Cry: An Interview with Gayle Kennedy.

Gayle Kennedy is a proud member of the Wongaibon Clan of the Ngiayampaa speaking nation of South West NSW. She is an award-winning writer and has published work in newspapers, magazines, literature journals, and for radio. She was the Indigenous issues writer and researcher for Streetwize comics from 1995-1998. Her book of poetry, Koori Girl Goes Shoppin’, was shortlisted for the David Unaipon Award in 2005 and her prose work, Me, Antman & Fleabag, was the winning entry in 2006. She wrote eleven books for the Yarning Strong series. The Series won the 2011 Australian Publishers Association award for Excellence in Educational publishing. Gayle is a disability advocate and has spoken widely in Australia and overseas on disability and the arts.

Gaele Sobott: Can you tell me about your background? Where you were born, where you grew up, a little bit about your family?

Gayle Kennedy: I was born in Ivanhoe NSW and we moved to Hay when I was seven. In between, from the age of two to five, I was in the children’s hospital in Camperdown and then a rehab hospital in Wahroonga, then the Royal Far West in Manly recovering from Polio

My mother and father were both born in Condoblin but Dad’s family is from around Cobar. Mum’s family comes from the Euabalong area. Mum and Dad met when they were seventeen, working out at Wilcania. They’re both eighty-three now and they’ve been married sixty years this year. They had six children, four girls and two boys. One of my brothers was killed in a car accident at the age of eighteen in 1976. Dad worked for what was then the Department of Main Roads in the Central Darling Shire. Mum worked for a long while cleaning in hotels but gave that up about thirty years ago. They’re both retired now. I grew up with their stories. My parents’ story is in the national library. Francis Rush did that. She did an interview with me too about my experiences of polio for the Social History of Polio Oral History Project.[1]

I hope these posts spoke to you, and you will let the authors know. Blessings