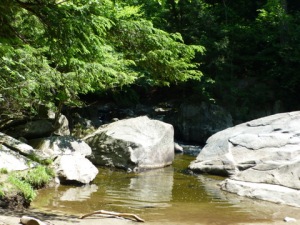 Yesterday I spent the morning with my good friend Alicia Daniels and her Ecopsychology class. Alicia is a marvelously gifted teacher, seamlessly weaving together her understanding of the Medicine Wheel teachings and her background as a field naturalist. Somehow, even as she acknowledges the suffering of Mother Earth, she also maintains an honest sense of optimism.

I was invited to class to speak about the role of the Elder and my understanding of the North. It was a bit of a trek down to the wheel the class had constructed in a glade in the field behind the campus. Sweetly, Alicia had brought along a folding chair for me, which one of the students happily carted to the wheel. After we prayed and conducted a brief ceremony we settled in for a chat, Alicia and the students sitting on the grass, and me perched on the chair. Although we had applied insect repellent, the mosquitoes feasted on us so we moved away from the shaded wheel into the bright sunlight.

The conversation turned to elders and questions: “What sort of elders do you know? Which are helpful or useful to you as young adults? What sort of elder do you wish to be in forty years? How might you shape your life in order to become the elder you wish to be?” I found myself in awe of these young people, mostly young women, who wanted to have a conversation about elderhood, a discussion that would have been almost unimaginable when I was their age.

As so often happens, the conversation eventually turned to identity and the Indigenous. One young woman began speaking about her Indigenous roots in Mexico and the terrible impacts of drug cartels on her home community. (Later I realized I had missed an opportunity to remind students that our collective hunger for drugs and diversion were fueling the destruction of Indigenous communities throughout “Latin” America.) The young woman worried she might lose track of her heritage, as she lives far away from that side of her family. When I suggested her blood knows, and her ancestors are close by, she became excited, and spoke to the importance she places on those relatives living and in the spirit world.

Eventually we packed up and trudged up the hill to campus.  We took a few minutes more and, sitting in their classroom, talked about their life journeys and hopes for the future. It was good to sit with them and to do ceremony. I am grateful for the opportunity to have joined their circle for a brief time.