We flew in from our week in Clearwater, Florida, at one this morning. As you might imagine, we are exhausted and glad to be home. While in Florida we were staying in the hotel where the psychodrama conference was held; the hotel just happened to be on the beach, and being off season, the beach was not at all crowded. We journeyed down a day early and took yesterday off, so managed some beach time and a day with family. We also had time to explore some of the area’s wildlife reserves.

South Florida is in severe drought and the cold front that went through during our visit produced only passing showers. The front produced unseasonably chilly temperatures and prove a couple of days of dramatic onshore winds that howled, keeping us awake at night.

Inevitably, one of the conversations at the conference was healthcare reform. Right now, the system does not work very well for providers and patience, alike. Reimbursements for service are unsustainably low and insurance premiums are unconscionably high. One of the major problems with the current system is that some consumers go on and off insurance as they need, or don’t need, care. This places greater financial stress on those persons who retain their insurance and are billed for the shortfalls created by intermittent insureds. Many proposals are being considered, but most of the proposed fixes for these problems are draconian and will only worsen a difficult situation.

Another conversation at the conference was the state of the world. Local Floridians were talking about the problem of sea level rise, the potential collapse of the coastal real estate

market, and the specter of awash hotels and submerged beaches in an area dominated by tourism. In the midst of the proceedings the news media began speaking about Stephen Hawking’s assertion that the Earth will be unlivable in one hundred years. All this reinforced a sense among some conference attendees that the state of the world is rather dire, an assertion I find difficult to argue with. The simple observation that most politicians seem to be in denial about our global ecological and climatic situation does not help.

While these deep and abiding concerns provided a backdrop to the proceedings, it must be said that like many artists, psychodramatists and Playback Theatre practitioners tend to navigate towards being optimistic. They are also a profoundly caring group of folks, and want to see the best outcomes for all concerned. They also know how to play and build community! 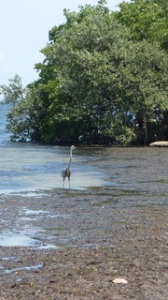 When we left Clearwater late yesterday afternoon the temperature was in the upper 70’s F, and the sun shone brightly. When we stepped off the plane here in Burlington early this morning, it was 43 degrees and raining. In spite of that, I continue to feel warmed by our week with colleagues, friends, and family, and of course, the warm Gulf Coast sun and breeze.

10 thoughts on “Report from Florida”