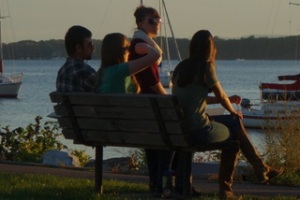 Yesterday, we went to Montreal, a marvelous, if notoriously inaccessible, city for the day. We had planned to be in a workshop focused on using puppetry for working with businesses. Montreal is about two hours from here, so we were up early, aiming to leave by 6 o’clock. We finally made it out of the house about 6:30. The drive up was uneventful, and traffic in the city was delightfully negligible.

Usually we can find our way around Montreal with relative ease; yesterday, perhaps because we were already feeling a bit crunched for time, we were unable to find the workshop site. Even using a map, our destination proved illusive; we found ourselves driving around in circles, passing old haunts, and running into newly one-way streets and, this being the season, construction.

We hoped to have coffee and pastry before the workshop, but by the time we finally found our destination, we were out of time. We parked and hurried directly to the workshop site, only to find ourselves confronted by a dauntingly long, steep stairway!

Immediately, Jennie went upstairs to speak with the workshop coordinator and discover the location of the elevator. There was no elevator! There was also no way I was going to try to climb the stairs! Somehow, in  spite of our diligence in asking about accessibility, there had been a miscommunication, surely a matter of language, culture, and expectation. Something was lost in translation.

The coordinator, who knows both of us, was deeply chagrined; I found myself angry, then profoundly sad. The pain of the situation was heightened as this was the second time in as many days I had encountered stairs when attending meetings we were told were accessible.

Jenny, graciously decided to stay with me rather than attend the workshop. After agreeing to meet the coordinator for lunch, we decided to wander around the neighborhood as neither of us knew it well. It was delightful! Unfortunately, believing it would not be needed, we had left my disability scooter at home, meaning I walked; thus, we had to be mindful of the distance we covered. We moved along slowly, me on crutches and in a brace, occasionally stopping to shop, and found ourselves needing to head back to the site sooner than we wished.

Jennie and I believe that disability is socially constructed, and tend to take a broad view of what constitutes disabling experience. We find it useful to define disability as a lack of access to the social and/or physical environment, a lack created by the beliefs and behaviors of self, or, especially, others. While many disability activists and theorists find this definition overly broad, we believe it aids people to understand the experience of disability, building empathy and community. At lunch, we had a fine discussion with the event coordinator about language (the coordinator’s first language is French), disability, and the financial challenges of making events fully accessible (inaccessible sites are often much less expensive, a crucial factor in non-profit arts programming). We also spoke about the possibility of creating some disability focused programing for the Montreal arts community.

Later, we explored another neighborhood, discovered a new, to us, extraordinary used bookstore, had an engaged and energetic, late fueled meeting with colleagues, visited the requisite bakery, and dallied over gelato at what may be Montreal’s finest ice cream shop.  As prophesied, the line for gelato was well out the door when we arrived, and, as it was a hot day, grew even as we sat at the bar by the window, savoring our delectable treats. Not a bad way to end a complex day in Montreal; not bad at all!

22 thoughts on “A Complex Day in Monteal”