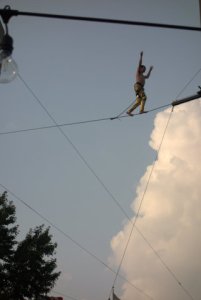 Montreal was hazy, a thin layer of smoke hung over the city. Tens of thousands of aces of forest were ablaze in northern  Canada, and the smoke from those fires rode the westerlies to Montreal. Some days were worse than others, resulting in hacking coughs and burning eyes.

At the conference, this haze was a thread running through the fabric of our days. The unofficial theme of the second day was life at the intersection of identity and social justice; many stories were shared, narratives echoing older, sometimes archetypical  stories, yet vibrantly alive in the present. We were reminded that we embody ancient human concerns, desires, and aspirations, that we are, somehow, walking in the footsteps of the Holy Ones.

The stories were linked to one another, tales of courage, persistence, and urgency. There were other narratives as well, speaking to attachment, the land, and, finding love in unexpected places. Through many stories, even the tales of love, ran a call to action: “The World Is burning!”

Climate change is one burning issue, genocide another; economic inequality, racism, and gender bias in many forms fan the flames. Caught up in the conflagration are everyday people whose stories beg to be told, heard, and honored. This is the work of Playback, and other forms of engaged theater.

The stories told at the conference addressed violence in its many forms, from drought and record heat in Vancouver, to the continued oppression of the Dalit in India. Climate change was one thread running through most of these narratives; many spoke to the myriad ways climate change threatens most of the worlds beings, while benefiting a few people who imagine themselves immune to the flames. From the conference participants who are most economically and environmentally at risk came the persistent reminder that those least able to meet the challenges of climate change are most impacted by it, and this trend is expected to continue as change intensifies.

Most of the participants at the conference arrived by air, and the conversation at the conference addressed that conundrum. The cost of travel dramatically limited who could attend, as did the Canadian government’s refusal to provide visas to several theatre artists. The climate impacts of air travel were acknowledged as well. Many of us stay in touch through Skype or  e-mail, yet acknowledge that to be insufficient; we need to play, eat, and speak together if we are to be effectively support one another’s work, share innovation, and create useful theory. Yet this need to physically share space contributes to the climate changes many seek to address, even as it promotes global community.

Such conundrums are, of course, the stuff of life, and thus, of good theater. I am eager to see what new work arises from the conversations and stories that were threaded through the conference.