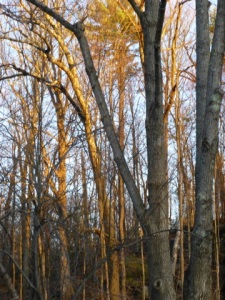 Indigenous people give value and preference to story. Stories arise from place; it is often said they come from the land, but it is more accurate to say they arise from places, which might include the water. Seafaring peoples depend on water for food and commerce, and many speak about the ocean as a First Place, a location of origin. These notions of storied places are inherent in shamanism and other Indigenous healing traditions, although they are largely erased from New Age and neo-shamanistic renderings. It is easy to forget, or ignore, that in the Americas, Indigenous healers have traditionally been instrumental in both resisting colonial power, and in healing individuals and communities harmed by colonial violence, including racism. In this context, shamanism is inherently political.

It seems to me that our preference for stories is difficult for folks of European ancestry to grasp. That is true for Canadians, Australians, New Zealanders, and folks from the U.S.. Many of us Native people understand ourselves to have been born from place, our tribes emerging from specific places: mountains, springs, caves, inlets. We traditionally understand the Earth to literally be our mother. If one stops to think about this, it makes profound sense: at the very least we are birthed from the stuff of this planet, the building blocks of place; clearly, one should not harm one’s mother, should not act in ways that defile the physical or spiritual environment.

Because we emerge into place, place becomes richly, densely, storied. A thickly storied place is a good home, a location in which to stay, to live one’s life deeply embedded in mythic time. It should not be surprising that Indigenous people often prefer to live in their birth places. Yet, this very frequently proves enormously inconvenient for colonial governments, who may have treaty, constitutional, or simply moral, responsibilities to the peoples of those places. In the U.S., Native lands are routinely annexed by local, state, and federal governments, usually with little fanfare. In Canada, the federal government seems determined to end any special status for First Nations people. In Australia, the federal government appears committed to the destruction of many remote communities, and the displacement of their people. Yet these events are barely noticed by the general public.

Back in November the Australian Broadcasting Corporation stated:

Aboriginal leaders and advocates are warning the “chaos and dysfunction” caused by closing down remote Indigenous communities will cost the West Australian Government far more than addressing existing issues.

Premier Colin Barnett has acknowledged his decision to shut about half the state’s 274 remote communities will cause distress to the more than 12,000 Aboriginal people living there and cause problems in the towns they move to.

However, he said existing high rates of suicide, poor health and a lack of jobs could not be ignored.

He has also labelled the “abuse and neglect of young children” a disgrace for the state.

In March, the BBC stated:

For a time most of the Sunday Island “saltwater” people lived on a reserve in the outback town of Derby, recalls Ms Hudson.

Later many moved to the coastal community of One Arm Point, 200km north of the resort town of Broome, where they resumed traditional hunting and fishing.

Their dislocation is an experience shared by many Indigenous Australians who were forced off their land, last century, either because of changes in government policy or lack of employment.

“That’s how people lost their culture,” says Ms Hudson. “It put us in a different environment, away from our country.”

Clearly, colonialism and racism are not past; rather, they are very much alive in the present, finding their way into communities, classrooms, and psychotherapy offices around the world.

As I write, I am reminded of a conversation I had last year with Maggie Carey from the Dulwich Center, in which she underscored the importance of communities of interest creating their own versions of Narrative Therapy to meet their unique needs. In her view, there are an array of Narrative Therapies, each adopting aspects of Michael White’s and David Epstein’s work, and building on it. This honors their work, which strongly resists globalizing and totalizing ideas, in contrast to the reductionist credo of much Western theory.

Michael often noted that Indigenous lives were traditionally embedded in story and place, and he worked with Indigenous persons to “thicken” and enrich the stories we tell about themselves, our home places, and the problems we face. He understood, from speaking with Aboriginal elders, that externalizing the problem was insufficient; healing arises from richly storied and placed lives. Yet this view is anathema to colonial governments, and thus, to many healthcare and social service agencies, who have a vested interest in therapies that render colonial violence invisible.

It seems to me that Narratively oriented clinicians increasingly lose sight of the Indigenous influences in Michael’s work. When used in context, externalizing and rich story development offer opportunities for Indigenous communities and individuals to challenge the authority of colonialism in our lives; they provide strategies for removing the stigmas attached to Indigenous lives, and for putting those lives into perspective. Thus, they are inherently political.

Also political in Michael’s work is the idea of audience. We each need people who understand and support our efforts to create lives that are richly resonate with our values, aspirations, and sense of belonging. I believe that were he here, he would remind us repeatedly about the power of an affirming audience, and the importance of supporting others in their healing. What appears too often missing in our Indigenous lives is an audience that honors the richness inherent in our stories and places, understands the histories of  colonial power and violence, supports our efforts to reclaim our lives and communities, and challenges the ongoing abuses of institutionalized racism and power.

This is the third in a series of posts about this year’s ASGPP conference. The other posts have been:

Whose Stories? and Making Space for Difference.