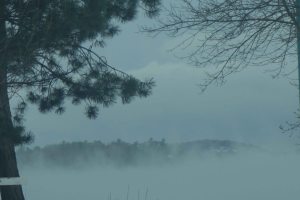 We were awake at four this morning so we took a peek at the snowstorm. Being the middle of the night, we could not see much, just enough to know that snow was falling heavily. Daylight brought a better look and the realization that, true to the forecast, snow lay heavy across the landscape. There is much blowing and drifting but we are confident that well beyond a foot of snow has fallen thus far, with more to come.

Jennie celebrated our snowed-in state by baking formerly frozen crescents and making strong black tea with warm milk. Not a bad way to begin the day.

This week we returned home from a month in Europe. Just before Christmas we visited a friend in London, then went to the Lake District for the marriage of two other friends. It was a splendid event, generating memories we will cherish for a long while! Christmas Eve we flew to Malaga, Spain, the beginning of a three-week wander through Andalusia. Perhaps this goes without saying, but there was no snow during our trip, although some of the mountains 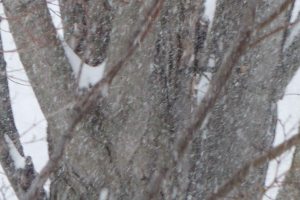 maintained the snow they received earlier in the season.

I quite intentionally ignored politics during our travels, breaking my self-imposed ban just prior to our return. When I did begin to catch up on events here in the U.S., I immediately found myself wanting to stay in Europe. This reticence to return quickly evolved into a profound sense of dread and despair, feelings that have persisted since our return.

The other night I was given a bit of insight into this powerful repulsion when I dreamed of childhood bullies. Kids and teens can be cruel, as can unconscious teachers, when dealing with disabled others, and the hurts inflicted on my young self still smart. That we (and Britain) have leaders that take pleasure in publicly humiliating persons who are in any way disabled, creates an environment completely lacking in safety, one that is simply much too familiar.

Of course, these same politicians attack other groups with equal, or greater, fierceness, seemingly taking great pride in inflicting immense harm on entire groups of persons. That they do so without challenge by so many others, including the vast majority of those in their respective parties, casts a deep pall of threat over the everyday lives of us on the receiving end.