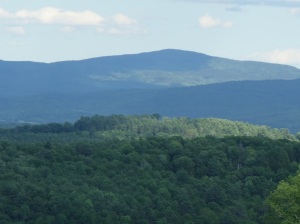 Today dawned chilly and dank. The abundant rains this spring and early summer have created a lush green world, and those luscious greens seem even more robust in today’s saturated air!

The Connecticut river marks the divide between the Green Mountains and the Whites. On our western side of the state Lake Champlain demarcates the Greens and the Adirondacks. Here in the great valley the landscape is gently rolling and the soils are relatively deep and rich. The valleys, rivers, and mountains of this part of the Northeast are rife with history, and rich in story. They are also strikingly beautiful.

Last weekend we were in eastern Vermont, visiting a farmstead that looks east over the Whites. The view is iconic: rolling mountains overlap as far as one can see. Just out of sight in the deep valleys lie the White and Connecticut rivers, which meet not far from where we stood. The landscape seems to converge there as do the waters draining off the mountains. Last year the rivers were running quite low; this year they are full.

Our lovely weekend has been followed by a week saturated with distressing news. Congress seems determined to put healthcare, and the lives of millions of people, in  jeopardy, and to do the same with the lives of endangered species.  There is talk of repealing the Americans with Disabilities Act, and returning to old policies that address Native issues by erasing the legal status of tribes and individuals en mass. Once again the connection between basic human needs, Native rights, and the fate of the environment are shown to be inextricably woven together.

As a disabled person who identifies as Native and loves the Natural world in all its complexity, I find myself wondering why anyone would want to do so much damage to

others, even as I recognize these actions as business as usual. Much of North American history has been a story of utilizing power to disenfranchise individuals, communities, and the Natural world in order to benefit a few. Yet the public narrative is predominantly one that obscures the ruthlessness of power by erasing genocide, slavery, and environmental ruin. Surely it is no accident we have, collectively, learned to live with a high degree of cognitive dissonance, and to insulate ourselves against the pain by utilizing an array of strategies including over consumption, drugs, and media.

Next week brings July 4th, Independence Day here in the U.S., and this summer Canada, our neighbor a few miles to the north, is celebrating 150 years of Confederation. For Native people in both countries there is not a lot to celebrate. Canada does do better with access to healthcare, and with a range of disability issues, although if one tries to navigate Montreal one would not know that. (We spent time in Woodstock, Vermont, last weekend, a town that somehow remains almost entirely inaccessible thirty years post ADA.)

In both countries Native issues and accessibility concerns overlap in that they are both about inclusion and sovereignty, identity and self-determination. No wonder the current assault on healthcare, Natives, and disability rights here in the U.S. is being met with protests and arrests, as it was for much of the last decade in Canada. How odd to see people in wheelchairs being arrested for demanding inclusion and safety; I thought we had gotten past that in the Eighties!

Most likely the current turn of affairs was predictable given the fate of Black Lives Matter. Greed holds power by isolating individuals and groups, defining them as other and marginal, and erasing the history and impacts of its effects in their lives. Erasure lies at the very core of the history and practice of North American governance, as does the harsh repression of any attempt to truly change the essentially colonial structure of government.

12 thoughts on “Report from the Mountains”