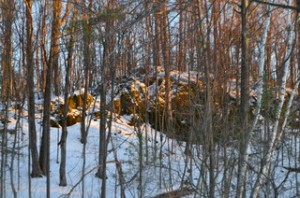 Today dawned murky. To the west, over the lake, darker clouds can be seen moving slowly towards us.

This winter started out with little snow, but in the past two months we have caught up and are now well above average in snowfall. In the mountains the snow pack is deep and moisture rich, leading to some concern about spring flooding. Given the past four winters, I think we can safely say that climatic variability has taken on a whole new meaning, even for New England.

I’m writing in the studio, where the plants in the south-facing windows are showing signs of stress. I watered them recently, but between the strong March sun and the radiators, they dry out surprisingly quickly these days. Let me take a moment and water them.

Speaking of plants, we went to the garden store last Sunday and bought seeds which we will begin to plant as soon as the snow melts and the garden beds are workable, which may be a while given tonight’s snowstorm. Oh, bother!

Speaking of bothering, I’ve been struck lately by the idea that if we just stop using descriptive nouns, or redefine our terms, the pesky problems they point to will just go away. Why, we can get out of any treaty just by stating publicly that the problem the treaty was meant to address never existed or has gone away! While climate change tops the list, we mustn’t forget the linguistic redefinition or erasure of disability, hunger, illness, and treaties with Native nations and people.

This rather murky approach to governance, and discourse in general, reminds me of the language used in treaties between the national government and innumerable Native nations, many of which are still in force, although this is forgotten or ignored by all levels of government. The most notorious phrasing in such documents stated that the treaty would be in force for as long as, “the rivers run and the grass grows”. On average, this meant about ten years, even though the last time I looked our local river was still flowing nicely and the grass was growing (in season) on our lawn. I guess that if one were following the letter of the treaty one could invalidate it during unusually cold winters when even the rivers ice over and appear no longer to be running, but to me that seems a stretch.

I guess we should not be surprised by the linguistic obfuscations of the new administration given the great popularity of Andrew Jackson among conservative politicians. Jackson remains one of, if not the, most hated politicians in Indian Country. It was Andrew who ordered the wholesale removal of Native people from the U.S. southeast states, breaking a good many treaties, ignoring the Supreme Court, and creating multiple Trails of Tears. His actions did accomplish one thing: they made the Indian problem go away, or at least head west.

Oddly, this reminds me of the mind’s capacity to survive harrowing experiences through the technique of structural dissociation, in which the mind compartmentalizes and exiles intolerable memories, sensations, and emotions. Through dissociation the self can contain, redefine, and effectively ignore events that are too painful to integrate into one’s person. Dissociation may well help us survive a terrifying and/or lonely childhood, but it plays havoc with the task of being an adult, leaving us with the difficult, abet rewarding, task of reconnecting, remembering, and embracing the intolerable and unimaginable.

Actually, maybe the jump to dissociation isn’t as much of a conceptual leap as I feared. After all, we have a sort of collective treaty with the planet, wholly aside from the Paris Accords; in that agreement our behavior towards Her sets the conditions for our very survival. I also imagine that Social Security and Medicare are treaties between the state and elders, insurance is a form of treaty with any who might become ill and need support, and the promise of a good education a treaty with our children, grandchildren, and the future.

Come to think of it, maybe all treaties are contracts with Nature, with young people, with the elders, with those soon to be born, and with the greater Future we are dreaming into being. While I doubt we could get a lasting, workable treaty with Nature and The Future through the present Congress and president, it would be in our best interest to do so. Of course, after passing the treaty we would still need to learn to keep our agreements and promises. Fortunately, the rivers are still flowing.

9 thoughts on “The Rivers are Still Flowing”