On Easter we visited friends at their sugar house in the mountains in the eastern part of the state. The day started out cloudy and raw, but the afternoon turned comfortable and the sun was bright and warm. We  were delayed, and reached the sugar house a bit late. 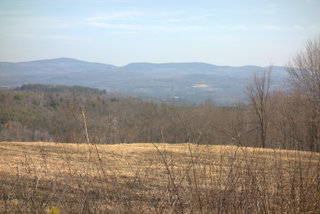 Inside, the sugar house was cozy, and we began our stay by drinking fresh warm syrup right from the finishing tank tap! Oh, heavenly!

The crew was hungry,  so we moved right into dinner. Our friends had clearly spent the entire morning creating a scrumptious Easter meal, which was accompanied by staggeringly good homemade wine. We ate, sitting around the evaporator as they periodically tossed wood into the firebox.

The interior of the sugar house was deliciously warm, the aroma of maple syrup permeating each in-breath. Maple mist hovered thickly over the evaporator as the maple sap boiled fiercely in the tank. It takes about 50 gallons of sap to make a gallon of syrup; that’s a lot of boiling.

Slowly, friends and neighbors began to drop by for conversation. There was an abundance of food, and soon they were eating, too. They knew the routine of sugaring, and quickly went to work, doing whatever was required in the moment. The sugar house buzzed with work, eating, and playful conversation.

Sugar house fires are both common and dreaded, and soon the conversation turned to memorable ones. My favorite story featured a farmer putting out a fire with gallows of maple sap.

After lunch, and a lengthy effort to get the tractor going, we went out to gather the last of the sap from this year’s run. Most of the buckets were pretty much empty, as were the plastic lines that bring in sap from some of the more distant trees. Sap runs best when the breeze is from the west, and Sunday the breeze was variable, but not westerly.

Climate change is making sugaring more challenging, as the seasons are becoming intensely variable. After an almost nonexistent winter, there were fears of an abrupt, early spring, and a poor harvest. Fortunately, this did not happen, and it seems most sugarers did just fine.

When we all gathered back at the sugar house it was time for desert. Out came a maple meringue pie! Fittingly, half the syrup used was from last year’s crop, and half was new, a celebration of continuity and hope. 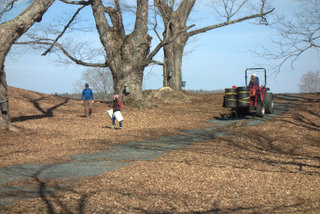 By now evening was coming on and it was time to make the long trip home. We bought a gallon of dark, full-flavored syrup, and our friends handed us another quart. Given the life giving, profoundly healthful benefits of maple syrup, we plan to thoroughly enjoy the the treasure contained in these jugs.

Our friends were happy to be finishing up the season. Now they face the less glamorous, two week task of cleanup. Come fall, they’ll cut and stack wood in preparation for the spring sap run. In the meanwhile, we’ll all enjoy the fruits of their labor.