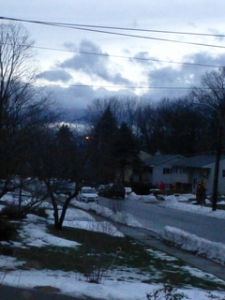 It’s after four and afternoon light is flooding our office. There is just the hint of sunset in the western sky, even as the shadows are lengthening over deep snowpack. The outside temperature has warmed to a balmy 27 degrees.  The warmth is soothing, if transitory.

I’ve just read an essay by a Native filmmaker whose work I don’t know. Ariel Smith is a street wise young Native filmmaker who specializes in Native horror films. She posted an essay today in the online journal, Decolonization. Her essay, Indigenous Cinema and the Horrific Reality of Colonial Violence, draws parallels between Smith’s life and work, and the genre of horror film.

She begins her essay,

I’m a filmmaker and an artist. I am also a Nehiyaw Iskwew, and a survivor of girlhood abuse and exploitation. These facts are at the root of my practice and have influenced how I see most everything in the world: colonialism, gender, relationships, economics, class, social hierarchies, feminism. My lived experiences with difference and marginalization form the basis for much of my film and video work.

Perhaps I was drawn to Areal Smith’s writing, in part, because I was recently invited to think about what I might have to say, briefly, for a community Passover Sedar. The topic is freedom, and I was asked to address the topic from a Native, or mixed ancestry, point of view. My initial thoughts are to speak to the ways Native people are still seeking acknowledgement and freedom. I might seek to honor the upwards of 10,000 murdered or missing Native women in Canada. (There appear to be no statistics for the US!), or the horrific fact that about half of all Native women in the US face gender violence, mostly from non-Natives. I might also speak to the daunting poverty of Pine Ridge and many Canadian reserves.

Passover is a celebration of the Jew’s journey to freedom, and is often understood as retrospective. Yet, our community passover provides a stage for the telling contemporary refugee stories of the search for freedom and ongoing exile. What stories might we Natives  to share? Stories of over four hundred years of horror and resistance? Stories of broken promises and treaties; stories of the theft of our sacred lands?

As I contemplate speaking briefly at the Sedar, I am holding a vision of truth telling. I’m not sure yet what form that sharing might take, and I ask Spirit to shape my thoughts. I would like to believe there is room for simply naming, in the spirit of Ariel Smith, both the good and bad of things as they are now in Indian country, and offering a vision for how our relationship with the dominant culture might change to make life better. In that way, whatever I say would take on the shape and intent of a healing ceremony.  It is good to enter sacred space and tell the truth as one sees it, and to speak words of healing. There is indeed much to be healed.