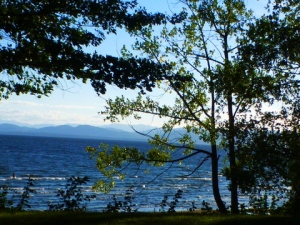 Yesterday, Grandfather South Wind blew strongly for much of the day. In the evening Jennie and I packed a picnic and headed for the lake. Jennie had noted that we would not have many more opportunities for our beloved picnics this year, so off we went.

When we arrived at the lake the South Wind tugged at our plates, and kick up waves large enough to body surf on. The South Wind takes many forms, from the gentle breezes of early spring to the gales of autumn. It is now, in early autumn, that I feel closest to the South Wind, for now he drives the warmth before the cold. In the day or two preceding each cold front the South Wind whips up the lake, pushing big waves before him, and forcing water into the south-facing bays.

I say “he” as there is something distinctly male about the South wind of autumn, compared about the female winds of early spring that bring the thaw and awaken the green ones. The autumnal South Wind bears tidings of dramatic change, immediate and unstoppable. He calls all to awaken and prepare for winter, brings down leaves and branches, and fills the sails of late season voyagers.

It is September, the transition month that leads us firmly into the West, place of Water and Dreaming. In these fine, warm days the hibernators (bear, woodchuck, chipmunk, and skunk) put on thick layers of protective fat. Soon they will take cover and settle into deep, slow sleep and dream. Only skunk is likely to make brief appearances come February thaws, the others sleeping through to spring. It seems fitting the wind that leads us into spring prepares the way for winter.

We humans are tempted to imagine the Winds as nothing more than the movement of Father Sun’s energy through the ocean of air in which we live. All else, we think, is anthropomorphism. Yet our wise ones have understood, and taught, for untold generations that the Winds have thought, personality, and intent. They are both global and local, many spirits and one keen overarching mind. They express themselves in meaningful ways at the ecosystem level, and learning to heed their voices, to ride their wild knowing, opens doors to ecosystem and soul.

The autumnal South Wind seems to me a keen intelligence. He clears the way into the West, whirling and swirling, beating the lake into a frenzy. Later he will, in collaboration with the North Wind, strip the trees bare, making them ready for winter. He is an Ancient One, defying our attempts at definition, yet generous in his teachings. We can share his strength and delve into his wisdom, feeling awe in the presence of a force and mind immensely larger than our ow

In visionary moments we may join his keen wildness, yet perhaps we cannot wholly grasp his vast knowing. The Winds are elemental, like Grandmothers Water and Moon, Grandfather Fire, and the Ancient Ones, the Rock People. They are themselves, and crucial elements of Pachamama, our Mother the Earth, and we owe our lives to them. They are great healers and can teach us much, if we but listen.

This year, the Autumn Equinox comes late, not arriving until September 22nd.  On that day we gather to acknowledge the turning of the year, our journey into the West, the immediacy of the Dreaming, and our great dept to Water. Perhaps the South Wind will join us. If so, we will be honored by his presence.

The South Wind returned, blowing fiercely all night, forcing itself through barely open windows and caressing our faces as we slept. This morning the trees whip in his embrace and the recycling literally flies down the street! Autumn is truly here!

5 thoughts on “The Spirit of South Wind”