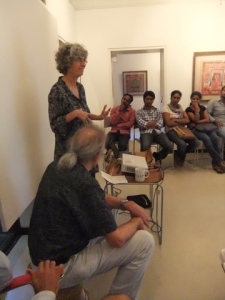 Saturday and Sunday evenings Jennie and I co-led a workshop on using the arts for healing.  The workshop was hosted by the community engaged and profoundly generous folks at the Apparao Gallery, here in Chennai. Jennie focused on the Expressive therapies and I on shamanism and storytelling. Workshop participants included healers, physicians, mental health clinicians, and interested attendees from many walks of life.

Most workshops have multiple objectives, and this was no exception. We hoped to stimulate discussion about the possible uses of the arts, and multi-modal approaches, in healing physical and psychological suffering. We wanted to suggest that healing may occur, even in the absence of curing. We also wished to introduce some tools that might be helpful in addressing gender violence. Finally, we hoped to enhance the participant’s appreciation for Indigenous ideas and practices regarding healing.

The first evening I began the workshop by invoking the Directions. Jennie then introduced the expressive therapies and showed a video slide show of anonymous art work generated in therapeutic contexts. I attempted to show slides as well, but was stymied by technical issues. Jennie also led the group in an art therapy exercise. I introduced the group to the idea of using simple ritual to create safe and sacred space, as well as to integrate warriors and victims of violence back into community, and we introduced the concept of integrating multiple approaches to address trauma.

Sunday evening Jennie opened the evening with a Reiki based 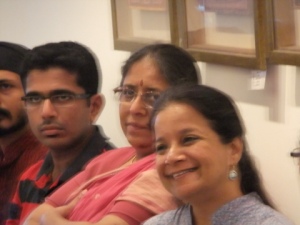 visualization to create safe space. She then led the workshop in a scribble exercise followed by brief storytelling generated by the scribbles. I told the first third of a First Nations story about a young woman who has a very challenging life, stopping at the moment in the story when there is a dramatic shift in the heroine’s fate. The workshop was then asked to break into several groups of six or so, and come up with possible endings for the story. As you might imagine, this very dramatic story generated an enormous number of possible outcomes!Yes, I did tell them the rest of the traditional story.

We choose a story that had considerable gender conflict and held real and potential violence that included sexual violence, hoping the story would have resonance for those at the workshop. The workshop participants drew a connection between the story and the current concern regarding sexual violence in India. As a result, we were able to talk about the need for maintaining strong communities to support healing from the effects of violence, and to protect against violence. We were also able to talk about ways communities might be complicit in generating or accepting violence.

From there talk turned to ways of using the arts, shamanism, and community building to bring healing to individuals and communities. As seemingly happens everywhere, the conversation continued well after the formal workshop closed. In small groups and impromptu circles, we exchanged ideas about soul retrieval, herbal medicine, Ayrevedic medicine, and Indigenous Indian ideas about healing.

After the workshop the energetic discussion continued as we dined with two young Chennai based therapists who are heavily engaged in using art, and alternative, therapies with a wide range of clients, including persons in the local psychiatric hospital. They showed us an outstanding slideshow of client work, and introduced us to new forms of energy work, well new to us. (Oh! The wonders of tablet technology!) At the end of the evening they walked us home, stopping traffic on busy roads so we could cross!

We are grateful to the Apparao Gallery, and to all those who came and shared with us during the workshop. It was a blessing for us.

An interesting aside: A couple of days into our trip I awoke from a deep sleep and asked Jennie when we were being interviewed on the radio. She replied that we were not. I was profoundly confused as I clearly remembered a conversation with her about being interviewed by the BBC. Clearly I had dreamed the conversation. A couple of days ago Jennie was invited to be on local English language talk radio. Last night, a TV film crew came and taped part of our workshop!