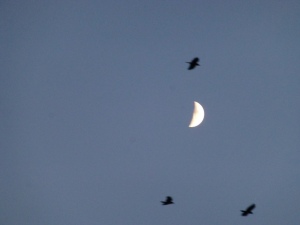 Old Man Crow sat on the ledge overlooking the city. High overhead the moon sang her melodies in the winter sky. Below, the two-leggeds rumbled and huffed.

Old Woman Raven took all this in from Her perch in an old crag well up the mountainside.

Old Woman Raven spread her wings and glided down, swooping to a landing by Old Man Crow’s side.

“Evening Raven.” Crow drew a morsel from his knapsack and offered it to Raven. He then chose one for himself. Together they sat and munched for a long time, listening to the goings on below, and to the bluesy tunes of the moon.

Now Raven drew a large stone circle from her bag.

“What have we here?” queried Crow.

“It’s a Mayan Calendar,” replied Raven. ” I bought it in Guatemala while I was on vacation last year. Had to beat off a dozen tourists.”

“Show me where the world ends!” Crow asked, quivering with anticipation. “I can’t wait! I’ve got the best seat in the house, and plenty of fresh road kill.” He handed Raven another morsel.

“I’ve been thinking,” Raven announced. “What will we do once all the two-leggeds are gone? There won’t be any roadkill. We’ll have to go back to hunting for ourselves.”

“Hadn’t thought of that,” mused Crow. “Maybe we can find a way to delay the inevitable. Hell, I sort of like the Fifth World.”

“I rather like the idea of starting over, not that anything will be different really. Of course it will be for a while; always is. Seems, though, that sooner or later everything goes down hill,’ responded Raven.

“It’s called ‘entropy'” sighed Crow. “We spend all this time making a nice world to live it and the People come along and mess it up. It’s not that everything’s perfect. I mean we keep having to tinker with things and all, but you’d sure think the People would appreciate a good thing when they have it.”

Raven looked at the small pile of bones before her, liked her beak, and smiled. “Yup.”

“So,” began Crow, “where is the end of the world?” He was looking closely at the stone circle. “And how did you FLY with that thing. It must weigh a ton!”

“Well, the end is right here,” Raven pointed. “The problem is the calendar is ROUND!” It ends here, and begins again here. It’s just a cycle.”

“You mean the world won’t really end? What a scam! I paid good money for this seat!” squawked Crow.

“We can’t be sure about that, but I have it on good authority the Creator’s away til after the first of the year. She doesn’t like to leave stuff like that for her staff.”

“What do you think the Sixth World will be like,” wondered Crow. “You think whoever takes the place of the two-leggeds will do a better job with the world, maybe even ban assault weapons?”

“I don’t know. It’s hard to imagine a world without the NRA.”

“Yea, I guess your right. I mean, Turtle Island would be a very different place if it hadn’t been for the NRA and their allies, you know, the Cavalry and such.”

“I don’t understand the choices the two-leggeds make. Sometimes I just want to cry,” Raven said as she stared down into the city.

Thinking about these things made them sad, so Raven and Crow  looked carefully at the calendar for a long, long time.

Finally, Crow face brightened. “Hey, He yelled excitedly, “look at that, there’s a crack between the end of this cycle and the beginning of the next one! I think it’s getting bigger!”

“Yes, Raven agreed. “It does seem to be getting larger! Hummmmm, I think the crack must have happened when I accidentally dropped the calendar. I was grabbing roadkill off the expressway when an SUV almost hit me and I lost my balance. Maybe there is hope!”

Raven reached deep into Her pack and drew out a very comfortable looking folding chair. “Mind if I join you? You’ve chosen a great spot. We should be able to see everything from here!”