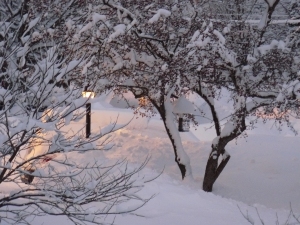 It began in mid-winter. The cat heard something scuttering about inside the kitchen cabinets. Sometimes we heard it, too. The cat would sit for hours, time he would usually spend sitting before his food dish, staring at the cabinets nearest the sink. We clearly had mice. They come into the house in the Autumn, seeking shelter from our often harsh winters.

Time passed. We had many discussions about whether, or what, to do. We waited. Then, about three of weeks ago, we found mouse droppings in the cabinets. This was the second time. A few days later, we discovered someone had chewed the bottom out of our corn chip bag; the chips were stale! It was time to act.

Jennie took matters into her capable hands, journeyed three blocks to the local hardware store, and purchased a black, plastic, live mouse trap. We applied peanut butter to the back of the trap, and set it in the cabinet under the sink. The first few nights nothing happened. Then, one morning, the peanut butter was gone: the mice had found the trap.

This established a pattern. We would bait the trap, a mouse would steal the bait two or three nights in a row, then we would catch the mouse. We would open the top of the trap, and look inside with great interest. Sometimes the trap was empty. Other times, a deer mouse would stare back at us. The mature mice would be interested in us, but the young ones would be terrified.

We then walked a few hundred feet to release each one in the woods. The more experienced mice shot from the trap (a long tube of a device) and hid under the leaves. The younger ones refused to leave the trap. When this happened, we removed the back of the tube and, invariably, the mouse left the trap. Sometimes, the younger ones would just stand there, in the open, and quake for a while, before slowly seeking cover.

I’ve been writing in the past tense, but there are still, apparently, mice in the cabinets; someone stole the bait last night. We have noticed the mice seem to be getting younger. We wonder whether we are feeding them until they grow heavy enough to trigger the trap. Jennie has even considered housing the trapped young ones in a gerbil cage until they are old enough to have a chance of survival in the wild.

I have my doubts about the survival of any of these mice in the outside world. Still, it seems more fair to at least give them an opportunity, rather than killing them in a regular trap. According to several internet sources, field mice have a life expectancy of about a year in the wild. They carry a variety of diseases, so are not recommended as house pets.

I believe it was last week that Jennie observed the following incident as she traveled a city street near our house. She was, I think, stopped, perhaps at the same light where I saw the deer bounding across the road a couple of months ago. Anyway, she looked up and noticed two flying crows squabbling over a  mouse being held by one. The second crow fought gamely to steal the meal. As they tussled in the air, the first crow dropped the mouse, who fell to the pavement, gathered itself, and realizing there was no cover nearby (it was, after all, in the middle of a busy four lane street) headed for the roadside. No dice; one of the crows swooped down, grabbed the mouse, and climbed into the air. Here Crow and Mouse were in their primordial dance. Then traffic began to move, and we know not the end of the story. (Tipping Point publish a fine blog post about the natural history of crows.)

This incident proved a rich source of conjecture for us.  How many times had we wondered out loud about the fate of the numerous mice we have trapped and released into the wild? Who would have guessed mice were so determined and resilient? The protagonists were crows, the object of so much discussion during our time in India, and here, since our return! Cows are sacred to Indian and Native American peoples. In Native American tradition, Crow is the cousin of Raven, and a trickster and creator in her own right. Mouse is resourceful, and often learns bravery to overcome timidity and fear; she is one who transforms. We are clearly in the presence of the mythic. We are reminded the Dreaming continues to unfold in our world and lives. Who would have guessed trapping field mice in our cabinets would open doors to the sacred?