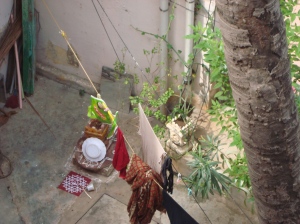 We’re home. The trip back from Chennai was demanding, taking about 29 hours. Today is a wet, chilly, day. I’m feeling jet lagged. I’m also thoughtful, having had so many conversations with individuals and groups. The conversations continued on the flights home, including with a woman (a dancer, theater artist, and choreographer) from East Timor . She was on her way to the UN to speak about the gains made by women in her country since independence. She spoke about her many friends who were killed during the pre-independence democracy protests, and about the recent growth of human rights, and economic and artistic opportunities in her country.

That conversation was a hopeful conclusion to a trip dominated by stories of genocide and dislocation. The stories began shortly after I landed in India, and continued throughout my stay. One of the themes that arose was that of fear. For Tamils, genocide is both immediate and distant. (Sri Lanka is geographically close to the relative safety of the  Indian province of Tamil Nadu.) There seemed little support for the Tamil Tiger insurgents, and much concern for the beleaguered Tamil population of Sri Lanka. The Tamils, with whom I spoke, fear both the possibility of further acts of violence against Tamils in Sri Lanka, and the possibility of blacklisting if they speak openly against the Indian government’s failure to protect Sri Lanka’s Tamils. Artists, intellectuals, and mental health clinicians stated that fear and trauma are large in their communities; this notion was expressed by Christians, Buddhists, and Hindus alike.

Perhaps our shared experience of genocide allowed so many people to open their hearts to me. My heritage as a tribal person, and role of shamanic practitioner, were recognized and appreciated, as were my many years of clinical work with trauma. Always, we spoke about healing the community and the individuals and families within it, both those persons directly effected by genocide, and those with indirect trauma. As I considered these many conversations, I found myself thinking about the ways political leaders can either encourage or impede healing, and the frequency with which politicians fail to see the pain of the people they claim to represent.

Many shamans and healers (also writers and artists) seek to see beyond political differences, to a larger healing. At the same time, we have traditionally understood that we must address the needs of our communities to the best of our abilities. We are called to aid those who ask, and to seek the best for the community as a whole. Frequently this means becoming politically active around specific issues, while creating a politics of inclusion and healing.

Arriving home to pre-election politicking, I am reminded of how difficult it seems for politicians to seek the common good, and how easy for them to highlight differences and be divisive. I am also aware of the thin line between party politics and genocide. Yet, as I rediscovered in an aircraft flying high above the Atlantic ocean, there is also cause for hope.