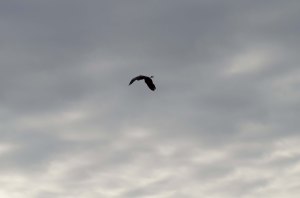 The day dawned cold with a mix of sun and cloud. Now the late morning light is dimmed by a thickening overcast. Friday’s snow has melted as has most of the ice on the lakes and rivers, and we seem on the cusp of spring.

Even though the light is at best marginal, I spent the morning taking photographs. The sloughs and backwaters are filled with waterfowl and the lack of foliage makes capturing their images much easier than it will be in a month or so. For whatever reason the birds were plentiful and close enough to the road that I could photograph them with a 300 mm lens.

There was something enchanting about their presence, and their apparent willingness to be photographed. This sense of the magical set me to thinking about how we tell stories of place.

Many years ago I worked for the Soil Conservation Service in northern Virginia. Many Civil War battlefields were in my catchment area, and I frequently drove through them. Passing through the gently rolling grasslands sites, I found it difficult to picture the carnage that had  taken place some one hundred years earlier. Being pretty much on the Mason-Dixon line I had less trouble understanding that the meaning placed in these sites was still profoundly contested.

Many of our parks and monuments are dedicated to the memory of events that transpired generations ago, and are designed to reinforce politically dominant narratives. Yet I imagine  what makes a place sacred or enchanted is personal story rather than grand narrative.

I believe we are most likely to care passionately about places that hold our most dear memories. This was brought home to me sometime in my late thirties when I climbed a steep trail through the woods of Clifty Falls State Park near Madison, Indiana, with my aging father who was determined to find the remnants of his childhood farm.

When we finally arrived at the site I could see few markers that might indicate former settlement. I vaguely remember the remains of a cellar hole and a crumbled foundation obscured by erosion and undergrowth. My father, on the other hand, easily packed out many details and led me on a lengthy tour of the place. For him, the old farmstead, long ruined and mostly returned to the land, was still was a place of enchantment.

We are living through a period of disenchantment, a time when potential short-term

economic gain trumps ecological or cultural value and results in the loss of dear places. Often the legal and public relations battles over these places are carried out in abstract and grossly economic terms, a contest seemingly devoid of personal story and conversation about the sacred nature of lived experience.

Even the ecological and natural history literature is very often devoid of truly intimate experiences. When I taught “The Ecology of Place” I usually had students read two books about Cape Cod. The first book was The Outermost House by Henry Beston. The book, published in 1928, is Beston’s often mystical, always personal story of living a year in a tiny cabin on the dunes near Eastham.

The second book, published in 2003, was The Salt House, Cynthia Huntington’s engaging narrative about the beginning of her marriage and a summer spent with her new husband in a minuscule cabin not far from Beston’s former abode. Huntington’s book, while deeply influenced by Beston, is a thoroughly human recounting of a life lived in the flesh, and the myriad ways being human, in all of its complexity, can lead to moments and places of pure enchantment.  Near the end of the book, Huntington and her husband make love in the dunes, a moment that may result in their first child, and one that forever marks that place as sacred.

Although representing very different historical times and gendered experiences, these books share a deep and abiding love of the Cape, and argue for the personal as essential to the experience of enchantment and the preservation of place.

Are there places and moments that are enchanted for you? Would you be willing to share one with us?