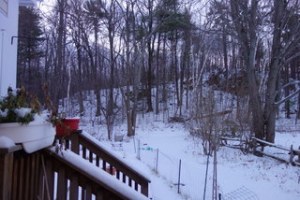 We went downtown last night to walk and enjoy the lights. As we drove home the snow began. This morning, for the first time this season, there are a couple of inches of snow on the ground. It appears to be snowing still in the mountains where snow fell most of yesterday. Christmas Eve the temperature is forecast to be about  60F, the old record is 51F.

The steady warmth of this autumn and winter stand in sharp contrast to the cold of the last two winters. Yet, a quick look at a long-term temperature graph clearly points to precipitous warming. Here in Vermont we are on the southern edge of the great Maple forest biome. The rapid warming of our region, especially during our winters, forecasts the collapse of this ecosystem, probably within thirty years. The changes are simply too fast for the ecosystem to adapt.

I’ve been reading Lauret Savoy’s new book, Trace. Lauret Savoy is a prominent earth scientist of African-American, Native, and European descent, who has encountered enormous prejudice in her life, even as she has found a world filled with mystery and wonder. Early in the book she speaks to being awakened to the possibility of a land ethic, and perhaps, a larger ethic for living on our small, fragile planet, while reading Aldo Leopold’s A Sand County Almanac. She quotes him:

This song of waters is audible to every ear, but there is other music in these hills, by no means audible to all. To hear even a few notes of it you must live here  a long time, and you must know the speech of the hills and rivers. Then on a still night, when the campfire is low and the Pleiades have climbed over rimrocks, sit quietly and listen for a wolf to howl, and think hard of everything you have seen and tried to understand. Then you may hear it – a vast pulsing harmony – its score inscribed on a thousand hills, its notes the lives and deaths of plants and animals, its rhythms spanning the seconds and the centuries.

What appealed to my fourteen-year-old sensibilities were the intimate images of land and seasons in place: an atom’s recycling odyssey through time….What also appealed was the seeming openness of this man’s struggle to frame a personal truth. In “The Land Ethic,” Aldo Leopold enlarged the boundaries of “community” to include “soils, waters, plants, and animals, or collectively, the land.” Though I couldn’t find words then, his call for an extension of ethics to land ethics seemed to express a sense of responsibility and reciprocity not yet embraced by this country but embedded in many Indigenous peoples’ traditions of experience – that land is fully inhabited, intimate with immediate presence.

These ideas prompted new questions. If, as Mr. Leopold wrote, “obligations have no meaning without conscience, and the problem we face is the extension of the social conscience from people to land,” then what part of this nation still lacked conscience broad enough to realize the internal change of mind and heart, to embrace “evolutionary possibility” and “ecological necessity”? Why was it that human relations in the United States I knew at age fourteen could be so cruel? (pages 32-33)

I came to A Sand County Almanac at about the same age, finding in it a refuge from the incessant cruelty of  an ablist world. It was also a comfort in that Leopold seemed to give voice to the ethic my family lived, often in what appeared a vacuum.  I do not remember wondering about his views of race relations, slavery, or Native people. Then again, we were a light-skinned family and I thought most of the prejudice we faced was economic, we were poor, and caused by me and the after effects of Polio. I did not consciously see that within the landscape were traces of my ancestry, that said ancestry was enormously complex, and that race, disability, and the fate of the land were woven through the very fabric of the world.

Now as an elder, I understand that the intuition I shared with Lauret, and countless others, that racism, violence, and the destruction of the land are inexorably intertwined, is firmly rooted in the history of the colonial endeavor in the Americas. The continuation of life as we know it in North America is dependent on a sort of amnesia, a collective refusal to acknowledge the enormous harm done to people of color, Natives, and ecosystems, or the inevitability that said harm affects all of us. The truth is that we must collectively address the institutionalization of genocide and slavery, as well as the long-standing war against the land, if we hope to live lives largely free of violence and fear, perhaps even survive as a species.

As we approach the Solstice, and Christmas, we are reminded that from great darkness, light shall surely return. Yet, we are also cautioned that such a return is largely dependent upon our individual and collective willingness to accept both relationship to, and responsibility for, the light, and for sharing it throughout the world.

As I read back over this post, I find myself remembering two deeply beloved teachers, who often said, “The world is as it is. Do what you can.” That is, after all, ultimately all we are allowed to do.