It’s been a while since I last posted. We’ve arrived at that time of year when everything seems to happen at once, including the end of the academic term. Somehow, in spite of this, Jennie and I drove the 2400 miles to and from my daughter’s home in Illinois for Thanksgiving. The drive over was fun, our time with my daughter and her family was marvelous, and the drive home in a driving rain was grueling. We’ve spent this week catching up on work.

Usually we fly, but this year flights during the Thanksgiving holiday were numbingly 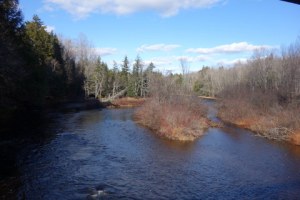 expensive, so driving made sense. It had been a while since we went on a road trip, so we gathered ourselves and set out through the Adirondacks towards Illinois.

We drove all day the Friday before Thanksgiving, managing to get within 90 minutes or so of Cleveland, where we hoped to see the Painting the Modern Garden: Monet to Matisse, at The Cleveland Museum of Art. We arrived at the museum just after opening, secured tickets to the exhibit, and spent a leisurely morning drifting from one painting to another. There was a steady stream of patrons viewing the show, but it was never truly crowded. As we neared the end of the exhibit, I overheard a guard explaining to a guest that the exhibit was only being shown in Cleveland and London, and had already sold out, in advance, in London. He explained that most days were also selling out in Cleveland, and that we were quite luck to have gotten in. Indeed, people had been flying to Cleveland from all around the world, just for the exhibit. It was a magnificent show, and we counted ourselves truly blessed! 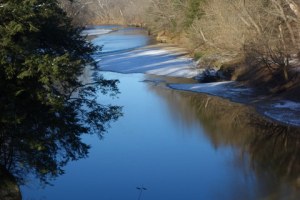 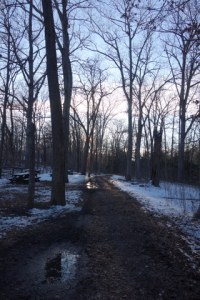 The trip was also an opportunity for me to visit old haunts. That evening, we had a lovely visit with my sister, who lives not far from our high school and the university we both attended.  Sunday morning we were off to Turkey Run State Park in Indiana. On the way over, we stopped in Indianapolis, to see the Conversations: the Eiteljorg Contemporary Art Fellowship exhibit at the Eiteljorg Museum. The exhibit showcased five contemporary Native American Artists, and kept us engaged for much longer than we had planned. Eiteljorg Fellowships are awarded every other year to a new cadre of outstanding Native Artists who are working in a Contemporary, Native focused, visual arts.  (As usual in Indianapolis, we found ourselves hopelessly lost while trying to find the museum, and were rescued by a very helpful bicyclist!)

Turkey Run State Park was a favorite get away for my family throughout much of my childhood. Back then, it seemed little known, but today more than one million people visit annually. We stayed overnight in the Inn, and although there was snow and ice, were able to explore some of the easier trails, and visit the nature center.

Since the park was a much loved destination of my extended family, Jennie and I were surprised to read, in

some park material, that Indians no longer visit. In fact, we were shocked to discover that the Last Native American had died there, while fishing! This was, and remains, news to us.

On the way to my daughter’s we stopped in the Illinois village where I grew up. Actually, it was the place I contracted Polio, shortly after arriving there. Still, it is a place of many sweet memories.

With a bit of effort we were able to locate the place where our home stood, now a sort of parkland. We then had dinner at a lovely, family run Mexican restaurant. The restaurant used to be a diner. It stands beside my junior high school, and was the place of many greasy dinners eaten before basketball games. Oddly, the food at the new restaurant was just as greasy…..

Then on to my daughter’s where we had four splendid days with family. At night, our hotel room overlooked downtown and the Holiday

decorations that filled the streets with light and color. Thanksgiving brought conversation about being Native American, the challenges and gifts that go with that, and, of course, the mandatory overeating. Oh, the pies!

Early Friday morning we were back on the road, in a driving rain. Somehow, we managed to make our way back across the soggy miles, through the snowy Adirondacks, and arrived home early Saturday evening. We were tired and happy; it had been a good trip!

19 thoughts on “Thanksgiving: A Road Trip”