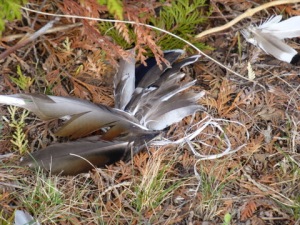 Tuesday was the last day of class for the semester. Around 5:10, as the last student was giving his presentation, I glanced out the window. Just above, and northeast of our classroom, four or five vultures circled. I interrupted the poor student and invited the class to come to the windows. As soon as everyone had seen the vultures and turned away, the vultures departed.

I then explained my sense of excitement, awe, and gratitude.

One of my most beloved teachers, Ipu, Dr. Bernardo Peixoto, died three years ago. Ipu was a condor shaman; when he was here, in Vermont, he was often followed by literally scores of turkey vultures, the “little brothers” of the condor. They would circle above him, spiraling for long periods as we walked or talked.

Ipu had a difficult life, in spite of which he often spoke of feeling blessed. He was responsible for the welfare of several villages in the Amazon, mostly along the Rio Negro. During the 90’s, his life was frequently in danger from the Brazilian government, which was, at that time, carrying out a genocide against Indigenous people in the Amazon. He was a brilliant man, holding two Ph.D’s, and acknowledged as a leading authority on the ecology and peoples of the Amazon. He spoke several languages and many dialects, and was employed by the Smithsonian Institution’ Museum of the American Indian. Ipu was also profoundly generous, humble, and funny

The time I spent with him was much too brief, yet I treasure memories of swapping stories, jokes and puns with him, and of late evening phone calls that came unannounced. No matter how wild my adventures were, his stories always topped them, usually leaving me in hysterics. (I also have fond memories of his wife, Cleicha, a wonderful, brilliant shaman and teacher in her own right.) I will never forget their retelling of a story in which they smuggled two capybaras aboard a domestic plane, only to have them escape, terrorizing the passengers until they were quietly caught, and safely stored, in Cleicha’s and Ipu’s soon urine saturatged backpacks.

In much of Native America one simply does not call oneself a shaman, let alone ask fees for teaching or healing. That is not so much the case in South America. I think it was 2002, and my dear friend, Susan Grimaldi, and I, along with a few others,  were visiting Ipu and Cleicha in their villiage near Manaus. For some time, Susan had been encouraging me to be more public with my work and teaching. During that trip, Ipu and Cleicha took up the refrain. When I argued that it was culturally awkward, if not actually inappropriate, for me to speak of myself as a shaman, Ipu simply said the world had changed, the need was great, and I should do what was needed.

Over the years I have shifted the focus of the Shamanisms course, from an academic overview of the many beliefs and practices that are incorporated under the rubric of shamanism, to a more nuanced teaching that includes instructing students on using some essential shamanic tools. This time, I focused on giving students a glimpse into the lives of shamans, the joyous and the heartbreaking. I attempted to consistently bring the conversation back to the ways simple shamanic practices might bring renewal to their lives, all the while reminding them that one semester does not a shaman make. The students, for their part, were thoughtful and engaged, with me, and with the elders who brought their lives to our class and who demonstrated that shamanism remains a way of life that is vibrantly alive.

As I watched the vultures circling and gyring in the northeast, the place of the spirits, I felt Ipu’s presence, and tears of gratitude filled my eyes. In that moment I felt both acknowledged and blessed.

Thank you, Ipu. You are missed.

15 thoughts on “A Blessing”