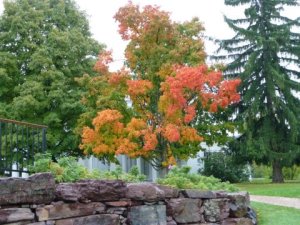 The rains of Autumn have come, along with days of cloud.  We lit a fire in the fireplace-insert last night for the first time this season, the heat driving the raw chill from the house, and inviting everyone, including the cat, to curl up before the dancing flames. In the day-to-day world, our busy time continues and I find myself simultaneously drawn to the outside world and wishing to hibernate. Such is Autumn.

After greeting the Equinox with a mad rush toward color, the trees here in the lower elevations have slowed down; most of our trees remain predominately green. Good color has spread across the outer edges of some, and yet others are in full flame. If the promise of the early color holds, this will be a memorable Fall color season.

Yesterday I had a long conversation with my sister. We spoke about the legacy of violence and abuse with which we grew up. Maybe the closing in of the season had her thinking about the terrors of the past. Once cold weather came, there were fewer opportunities for escape from our house, and we became more vulnerable. The violence seemed more deeply ingrained on our mom’s side of the family. Certainly our mother’s mother had a cruel streak, which mom inherited. My dad’s violence towards us was more episodic, and seemed largely absent among his sibs.

Both our parents grew up in relative isolation, on farms far off the grid. Both worried about our safety, and often became violent when they perceived threat. That said, my mother, like her mother, seemed driven by cruelty. As I grew up, she moved her gaze from me to my sister, with whom she was merciless. Somehow my dad never noticed the welts and bruises on us; when he finally caught my mom beating up my middle school aged sister, he put a permanent end to the beatings. Mom’s sister, Jimmy, a nurse like her mother, left her several children in an orphanage. (I wonder whether this, too, was a repetition.)

Pop’s mom was distant, often silent and focused on protecting us. The world, for her, seemed a very dangerous place indeed. She was, according to my sister, “scarey!”. My sister insists that Gram spoke with her about being Indian. Gram seldom spoke to me. She was, rather, a silent, brooding presence in the room or garden.

Alcohol was absent from our home, and from the homes of most of our extended family. Only my mother’s father drank consistently. Alcohol was feared and respected.

As I grow older I spend more time with the Ancestors. I have begun to see my parents’ anger and brutality as occurring in a larger, multi-generational context. They and their parents were very much the products of their times and places. Violence, hunger, and desperation stalked them, along with Europeans who sought to harm them. Yet our families also embraced, and were embraced by, Europeans, and there was much intermarriage. I believe my father’s sister Mary’s husband was one such European; he was one of the finest, kindest men I have ever met. Their home was a refuge for me.

I imagine that most people simply do not comprehend the history of European settler violence against Native America, nor our determination to survive and thrive. Nor do I think many people understand the centrality of children in Native culture. (A healthy Native family tolerates no violence towards children.) This lack of understanding allows folks to imagine the violence and alcoholism permeating the lives of so many Native families is somehow endemic to Natives, rather than the result of 500 years of settler brutality and genocide.

Maybe this lack of comprehension is at play in the Massachusetts U.S. Senate race. The contest is between Elizabeth Warren, who claims Native Heritage but seemingly has had little to do with Native people or causes, and Scott Brown, whose staff has proven deeply racist. Neither has spoken to the challenges facing Native people, nor to the courage and determination of our families. I find myself both fascinated and deeply saddened by the racism and implicit violence that have characterized both campaigns. I am also aware that their campaign is emblematic of the way Native people are perceived and portrayed by many people in our country.

Autumn in New England is a time of great beauty. As we bring in the harvest, breath in the fresh, cool air, and feast on the deepening color, we are reminded that the Ancestors are drawing close. This is a time of ceremony and remembrance. This year, the rhetoric of racism that has characterized the campaign season reminds us of the challenge faced by those who went before us. We are also reminded of our obligation to do our best to create a world that will welcome those who will come after us. Let us do our best. May a time of peace and healing come soon.

4 thoughts on “The Rains of Autumn”