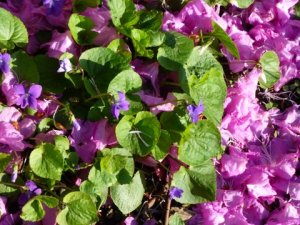 Our world here, in northern Vermont, has burst into leafy green, and splendid , vibrant color. This morning the wind literally howled through the treetops as the rains came in. Spring is here in all her fullness!

I have written often about the symbolic nature of Self, and the myriad ways micro-aggressions serve to diminish Self, both in individuals and peoples. Quite often, micro-aggressions aggregate. The resulting injuries to Self, when inflicted on individual and families, may be mitigated by psychotherapy and/or ceremony. When attacks are against an entire group, the wounds are even more difficult to heal.

Last weekend brought heartbreak to Indian Country. The White Buffalo Calf and his mom, exceedingly sacred beings in the lives of Native people, were killed and skinned while their caretakers were away briefly. I do not know how to begin to explain their centrality to the hopes and aspirations of  Indians throughout North America. Native News Network, in a lengthy report on the killings, wrote:

Among some American Indian tribes, it is believed that the message of a white buffalo is that humankind should live with the understanding that all living beings are linked and interdependent. The birth of a white buffalo is an opportunity for all people to collectively focus their energy on the peaceful, healthy and harmonious world.

I can only imagine the grief and rage felt by those from many tribes who have lived close to these Buffalo People, and who had planned to come together shortly to celebrate them. These killings are steeped in symbolic meaning. The White Buffalo is a truly miraculous being. It is estimated that they may be the result of only one in 10 million births. There are very few buffalo remaining to breed, and Native people must often wait for generations for the birth of such a sacred one. Buffalo are central to the well-being of Plains Native cultures, and remain at the center of much Native mythology and spiritual practice. The murder of these animals is another assault on the very spiritual core of Native America.

We can only assume those who enacted these killings knew well the spiritual meaning and impact of their actions. This act transcended the status of micro-aggression, for it strikes at the very heart of Indian Country, and we are people of the Heart. Whether intended to be, or not, it is a hate crime of immense proportions. The harm done will linger for a long, long time.

If you wish to learn more about the importance of The White Buffalo to Native people, visit Nativevillage.org.

18 thoughts on “The Death of White Buffallo Calf: Attacking the Heart of the People”