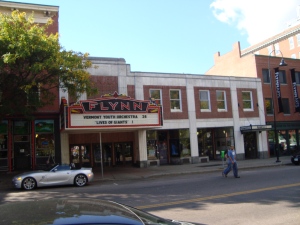 Last night I went to the Flynn Theater for a performance of The Lives of Giants, by the Cambodian/American dance theater group, The Khmer Arts Ensemble.

The Program Notes say the piece is taken from the Reamker, the Cambodian version of the Ramayana. The story, as retold in the Program Notes, relates how a giant, living in the heavily realm, finds himself tormented by a group of angels. Eventually he can take  no more, and  requests aid from a god.

The god gives him a large magic finger, which the giant uses to avenge himself on the angels. He becomes enamored of his new power and “lays waste” to heaven.  Eventually, in spite of the love of,  and  many efforts at peacemaking by, the wife of the first god, another god kills the giant. As the giant dies, he swears he will be reborn with even more power in his next life. He dies in the arms of the goddess, who has visions  of the terrible times to come, and “laments the triumph of violence over compassion”.

The ensemble, based in Cambodia and California, is comprised of young people who are the first generation of performers  to mature after the Cambodian nightmare in which  90% of the country’s artists were killed.

The choreographer, Sophline Cheam Shapiro, quoted in the Program Notes, says, “….no matter how promising the rhetoric of change, it often results in the same cycles of abuse and humiliation that proceed it. …I have long recognized the persistence of corruption, arrogance, rigidity, and loss of compassion that those in power resort to….Power, of course, manifests itself within every level of society…..and its misuse infiltrates these communities from the top down and tends to repeat itself.”

She continues, “Violence begets violence. The abused become the abusers…. Nevertheless, I believe compassion is an antidote.”

As I read her words, and watched this stunningly beautiful, profoundly otherworldly, performance, I found myself deeply moved and saddened. We have seen these cycles of violence repeated frequently during the last century.  (They are strikingly evident in the deeply mired hatreds that mark our present political landscape.) I also thought about the many young people who suffer bullying at school, and receive no aid from teachers and administrators when they request it.

Today I read a brief story about cycles of abuse and revenge in an Australian Aboriginal community. Ron Benson wrote, “When a large group of Aboriginal men, women and children fled from the central Australian community of Yuendumu last week, they were fleeing a form of retributive justice, a tribal punishment inflicted by spears, where violence repays violence and the accused are shamed into changing their ways.”

Last night’s magnificent performance of dance and live music referred to the Cambodian experience, yet, as Ms Shapiro noted, it’s themes were universal. We humans find ourselves repeatedly engaged in cycles of revenge and violence. Again to quote Ms. Shapiro, ” ….The Lives of Giants conjures this mysterious and magical world as a reflection of our own.” The conjuring succeeds.