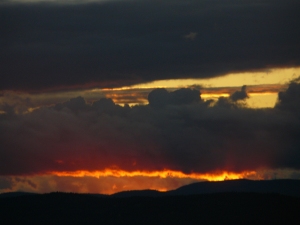 Although we are in something of a heatwave, the seasons are changing. There is color amongst the green leaves, there are asters in the fields, and nights are noticeably cooler. Indeed we have been needing blankets! Celtic Shaman noted her tipsy response to the immanent change:

To stand on the brink of a new season, smelling it’s coming on the breath of the wind that steals over the hedge, into the garden and caresses my nose, is a misty, dark, scary, tremulous, exciting moment.

The past few weeks I have written often about the need for courage and compassion in the world. There is much being written by others about the challenges facing our country, and the world. Some writers are compassionate and insightful. Others are angry, judgmental, or simply caught up in one frenzied drama or another. If there is a theme, it would be change. It would seem we all want change, and we want it now. Of course, we are not in agreement as to what should change. Nor do we agree upon what the problems are, or their causes. What’s more, we seem to have forgotten what we learned in kindergarten: take turns, listen to one another, and be kind.

Rob, at Newpaper Rock,  provided one First Nations response to the recent uptick in anti-Muslim rhetoric and behavior by noting the general racist Tenure of the discussion:

I presume American Indians–the original socialist One-World brownskins who attacked white Christian freedom-lovers–are in on the plot.Where’s Joseph McCarthy when you need him? He’d be able to ferret out the terrorist sleeper agents and terror babies threatening America. You betcha!I could go on, but I trust you get the point. This is the same bigotry Columbus brought to the “New World.” The message is even the same: “They worship something strange and incomprehensible. Kill the devil worshipers before they corrupt, degrade, and destroy us!”

Shamanista considered the many problems facing humanity, and the other organism with whom we share this small planet, and concluded:

There are local, global and regional events and situations that exist to call the attention of humanity to the need to change our ways—and our thinking and beliefs.

We may need to change our laws and even our governments to remedy the deep causes of such situations. Superficial healing can just delay the inevitable or require more extreme measures by spirit to get the attention of enough humans to change things.

One of my dear teachers was a roguish trickster from Siberia. Half Jewish, half Siberian, he regaled me with stories of his youth as a Bronx gang member, who, sent to his Siberian grandmothers for straightening following a string of car thefts, bedded much of the village in route to becoming a world renown shaman. (I dare you to find the truth in all that!) Sometimes he regaled against Buddhism for its 500 year war against Siberian shamans. Sometimes he turned poetic as he spoke about his Lama friends and teachers. Life sure is complex!

Anyway, I never seem to stop being amazed at the shamanic roots of Buddhism. These roots are most evident, I think, in Tibetan Buddhism. To me, it seems totally appropriate that Buddhists would war on the “primitive” shamans, flailing away at their own shadowy depths. Of course, as Jung and many others have noted, we are all tempted to reject much of our psychic terrain, and consequently, we reject, and often attack, others. Soul retrievals attempt to address this, as Innerbodyexperience discovered:

Apart from finding and restoring lost fragments I stepped into some of my own shadows. I learned the causes and patterns of cycles such as recurring depression. Soul retrieval is a beautiful thing to do for yourself and massively important. What I love about these practices is rather than explain them you experience them, and there’s no reason for doing them other than that they work. Breaking out my pom poms.

Of course, the world’s problems are also the challenges we face in our everyday relationships. It takes skill to live with other human beings.  Living with shamans, healers, and other medicine people might even be more difficult. Urbanshawoman wrote about her surprise and gratitude that her partner is supportive to her as a woman, poet, and shaman, both in the world, and in bed:

He seems oddly proud that I’m a shaman, though it’s not something we routinely tell the world about (He’s even more proud I’m a poet; that, he made sure his whole family knew about the first time he brought me out for them to look at. They seem a lot more respectful of the art than my relatives are.). Proud, yes, but still a bit unnerved by the whole process of journeying. I know he trusts me when I tell him I know how to take care of myself there — and more importantly, how and when to let my allies take care of me — but I also know it disturbs him to see me go that deep. I always assumed I looked like I was asleep, or maybe in deep meditation. He’s the first one who thought of filming me in trance, and I’m here to say I don’t look asleep or meditative; I look like I’m dead and forgot to stop breathing.

Much that is coming to pass has long been prophesied, and thus anticipated. Many of us have made the journey from the North to the South. More recently, those of the South have increasingly journeied North to share their wisdom. These many small journeys began to fulfill ancient prophecy, setting the stage for a great mending of the spirit of the people.  Milkyway- maid noted another significant event on this road:

There is always the possibility of healing, even in the most challenging of times.