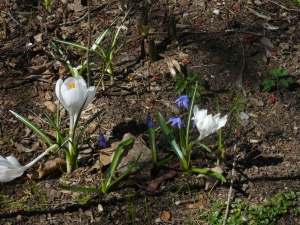 In the past few days I have been thinking about a story told to me by my teachers Bernardo and Jenny. The story is this: Maybe twelve hundred years ago a teacher appeared in he Amazon basin. This teacher traveled throughout Amazonia, including Peru. He is said to have had scars in his side and around his head. He taught peace, and encouraged the people to stop their warfare and other violence against one another. He healed many people and was revered as a great shaman.

This teacher  warned the peoples of the Amazon that in the future a light skinned race would come from the east, bringing much suffering and destruction. He also promised that despite centuries of persecution and genocide, the peoples would rise again to teach their traditional values and vision to the world.

Soon after the European colonizers arrived, the people began to understand the time of hardship was upon them. They remembered the teachings of the great shaman, and recognized him in the Biblical stories of Jesus told by the Friars. Although the population of First Nations peoples declined precipitously, some people remained. Many remembered the stories of the great shaman and held them close to their hearts. Although they listened to, and recognized, the stories of the Friars, they were often confused by the behaviors of the Europeans, both soldiers and Friars. These men seldom followed the teachings of the great shaman as they professed. Their words and promises were empty.