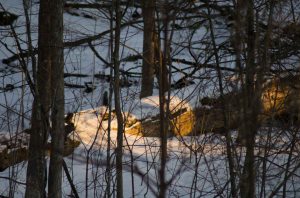 A lovely morning, the bright mid-February sun illuminating the very air as it bounced off last night’s fluffy snowfall. Now clouds have begun to fill in from the west, turning the day chilly and dank.

This coming week is forecast to be as much as 30 degrees F above seasonal norms. There will likely be sap runs and some adventurous souls will likely sunbathe if the sun appears long enough. We are also into Winter break at many of our schools, with families taking off to the ski slopes or to warmer climes for the week.

Speaking of school, our small state was stunned this week when a young man was arrested for planning an attack on the small rural high school he once attended. The eighteen year old had been in a mental health treatment program in a nearby state, but had come home to carry out the well planned attack.

All this began unfolding on Tuesday, the same day as the Florida high school shooting, and reminded us that we are not immune to the epidemic of mass gun violence. We Vermonters pride ourselves on having created a pretty fair place to live and to raise children, so it came as a shock that one of our own kids could live with such fierce hate and intent to harm others.

As far as we know the young man was not motivated by racial or ethnic hatred, as was the youth in Florida who chose to attack a predominantly Jewish high school. Rather, the Vermont youth had previously attended his chosen target high school, and knew some of the students and teachers there. His rage seems to have been more personal.

As always, following actual, or potential, acts of mass violence, we are left to ponder what is truly happening in our society that encourages Caucasian males to plan and carry out mass killings, and what we might do about it. (Virtually all of the mass shootings during the past ten years and more have been conducted by Caucasian males.) I don’t know the answer to either of these questions, although I am certain our leaders’ encouragement of violence in support of ideological goals must contribute to the problem.

While mass shootings rose significantly last year, along with the rhetoric of violent change, during the first six weeks of this year mass violence has been particularly virulent. Yet those in power appear unwilling to reign in either their hate speech, or the availability of the assault rifles that are the weapons of choice in mass shootings, weapons that may be purchased for less than $500 US when purchased with abundant ammunition.

Here in the U.S. the level of everyday violence is rising, along with a sense of unease and vulnerability. Now, when we say goodbye to our loved ones in the morning we collectively find ourselves wondering whether our partners will arrive safely home from work and our kids from school. We also wonder how we are to create needed change when the gun lobby uses its wealth, and the greed of our politicians, to block any and all attempts to make meaningful change.

Here in Vermont there is a long and healthy culture of hunting for subsistence, and rifles and shotguns are often family treasures as well as tools. The idea that those weapons could be turned on our loved ones, friends, and students remains abhorrent to most of us, even as the likelihood someone will use guns to create mass tragedy and suffering, even here in Vermont, increases.

After this week Vermonters are talking about mass violence from very personal perspectives, a conversation that promises to last well beyond this fall’s election cycle.

18 thoughts on “A Letter from Vermont: A Near Miss”