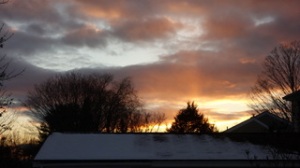 The year has turned. We spent New Years with family near the ocean, accompanied by warmth, both emotional and physical, and much good cheer. Yesterday was New Years Day, and we celebrated by following our Sunday routine when with family: breakfast, conversation, and newspapers. We then drove the five hours home.

This morning I am listening to BBC Radio Three, and their week-long exploration of the Second Viennese School of music. The composers under discussion influenced me greatly when I discovered them in the middle Sixties; they include Berg, Schoenberg, Webern, and a good many others. These folks, mostly male of course, revolutionized “serious” music at the turn of the last century. Only after the ruckus died down was the musical world able to see the continuity within the apparent destruction.

I’m also reading a lovely book, In Montmartre by Sue Roe, a lively walk through the visual arts revolution that took place at about the same time in Paris. The book focuses as much on continuity as on disturbance, while carefully explicating the development of Fauvism and Cubism. Very much as was true among the composers in Vienna, there was much competition, conversation, and just plain copying taking place among the artists who lived, worked, and played on the hillside overlooking the heart of Paris. As I read (I am up to 1904 or so) I am reminded of the “revolution” that would take place among the Abstract Expressionists in NYC some fifty years later.

Revolutions appear to arise from nowhere; only after the passage of some time do we begin to understand them as having arisen from social/historical field. At some point we begin to realize that some form of upheaval was built into the very social fabric, and that what appears to be a revolution is simply the flourishing, for good or ill, of that which had been gestating for a while. I wonder how we will view of the rise of extremism in the US and elsewhere in a few years. Will we still see it as an anomaly, or will we view it as predictable given the social context of our time?

I wonder about the relationship between the development of Post-impressionism and Expressionism (and later Dada and Surrealism) and the subsequent rise of the Nazis. What role did the development of Dada and Surrealism play? Was the Nazis reign as much a reaction to the destruction of the classical tradition as it was an economic and ethnic reordering? Certainly one may argue that the current rise of the extreme right is, in part, a reaction to the artistic and social reordering that began in the 1950’s.

As I look out the studio windows, to the snow-covered hill and woods beyond, I wonder whether the growth of personal and artistic freedoms must inevitably spur a counter movement.

12 thoughts on “Cycles of Change”