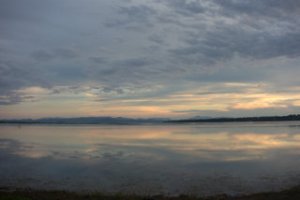 It was a short night as we went to bed late and awoke early. The darkness was cool and we enjoyed sleeping under the comforter, awakening to a soft, pleasant morning noticeably free of the humidity that has characterized much of the past couple of weeks. The recent rains have inspired the gardens to grow profusely, and the verdant green hillsides look more like early June than late July. We have settled into that portion of summer dominated by lilies; it seems as though everywhere one turns the world is lush with color. In the countryside, day lilies bloom in abundance, often marking the location of a now extant homestead.

The other evening we packed a picnic and headed up to Sandbar State Park, one of our favorite summer haunts. The day had been warm and we expected we would encounter hoards of folks swimming and boating. When we arrived we discovered the park to be relatively empty, there being just enough people to allow some semblance of sociability.

The lake is about eighteen inches lower than the long-term norm, meaning one has to walk out quite a ways before reaching water deep enough to allow swimming. That also means one has to drag kayaks through long stretches of shallows and sandbars if one has the desire to paddle. We noted that one wise couple enjoyed the beach and a picnic, then loaded their truck and drove to the boat launch area on the other side of the road from the park, where deep water is much more accessible.

I’ve been thinking about E.B. White, the long time writer and editor at the New Yorker, and the author of Charlotte’s Web. As a young man of great promise, White ignored the warnings of his writerly community and largely abandoned New York City for a much older woman and a Maine farm. His subsequent essays, a regular feature in the New Yorker, reported on his everyday life, the farm, and the natural world in which he reveled. His essays usually managed to embed life on a small “gentlemanly” farm in the political and cultural context of the greater world, juxtaposing the local and everyday with the cosmopolitan and global.

I began reading E.B. White in high school and there is no doubt his prose has deeply influenced mine. Over the years I have worn out several copies of his essays, and more than one copy of his seminal manual for writers, The Elements of Style,written with William Strunk Jr. He lived from 1899 to 1985, as he might have said,, “a good long time.” Now, as I read an essay from the 1930’s, the work seems a tad dated, although the prose is as innovative and engaging as ever. At the same time, his acknowledgement of a certain growing sense of foreboding sweeping across the land has a very contemporary feel, as does the aesthetic distance he acknowledges; he is, after all, writing from Maine, then an even further distance from the complexities and intrigues of New York and Washington.

White wrote about his concerns, grand and small, and about the trivial life-making details of his existence. He relished the weathers, great and small, the animals with whom he shared the farm, his beloved wife, and his social world. In his prose and fiction, the trivial becomes vital, the everyday upstaging seemingly more important world events. His writing contains a steady humanity, compassion, and curiosity that I find generally absent in much current mass market writing, and his books continue to hold a privileged place on my bookshelf.

I would love to sit down with him and an iced coffee, an item I imagine he would find intriguing but alien, and hear his take on our contemporary world. I am sure the conversation would take unanticipated turns and instigate smiles and laughter, even as he lamented the loss of values he held dear. Surly such a chat would be a very good way to savor a summer’s afternoon, producing moments and memories I’d revisit for years to come.