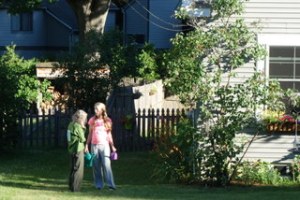 High summer lies draped across the landscape. Renaissance music plays softly on early Sunday morning radio. Earlier, although most species have raised their young and stopped defending their territories, birdsong filled the air. Sunlight, at a midsummer slant, highlights light and shadow, catching a neighbor at her early morning tasks. This morning echoes Matisse, Avery, Monet, Cassatt, and many other artists who celebrated the art of everyday domestic joy.

The Twentieth Century witnessed conflict between artists who celebrated the pleasures of modernity as domesticity, and those who focused on the idea of progress, speed, and war. At the beginning of the last century, a turn towards abstraction and color spread through the art world. Perhaps it began with the Impressionists and Post-Impressionists, and their fascination with gardens, parks, cafes, and simple moments of domesticity, as well as with speed and movement; or perhaps we need to look even earlier, to the late work of J.W. Turner who became fascinated with the machines of modernity.

Oddly, both camps became the focus of much ire from the population at large, before the Impressionists’ celebration of everyday life grabbed the fancy of the times. Last fall, we stopped in Cleveland Museum of Art on our way west, to see an exhibition that covered this period, celebrating the garden, in many ways the very center of domesticity in early Twentieth Century Europe and North America. This summer, the Peabody Museum is showcasing Childe Hassam’s garden focused work from the Isle of Shoals.

High summer has historically been both a time of labor and of ease. The days are long and the nights are warm; this is a time of hard work and romance, filled with birdsong, dramatic skies, and flowers. The labor of the fields translates into diversity and pleasure at the table, and beauty on display in the parlor. Cottage gardens offer both produce and blossoms, and if one has the funds, gardeners can be hired to extend the garden and the harvest. In the countryside the first haying has taken place, and bales lie in the fields.

I have been pondering the rise of terrorism, and the focus, of those who reject modernity, on attacks against places that symbolize the bourgeoisie middle-class: cafes, concert halls, art museums, and airports and train stations, places celebrated in modernist art. These acts of terror seek to undermine the very notion of pleasure, ease, and comfort, notions that also, paradoxically, threaten our current culture of high consumption.

Yet, I imagine that we go astray when we view the human hunger for domesticity, comfort, and ease as modern, or even as bohemian. In the Western canon we need only look back to the Psalms to notice the lure of pleasure and ease, and quite a few Native American stories playfully address this theme. Surely, moments of ease and comfort, pleasure and intimacy, have been sought by people throughout our history. There have also, as a counter note, always been those who prefer warfare and the acquisition of material wealth, who seek pleasure but appear to disdain the domestic moment. Perhaps terror has always lurked, threatening to dismantle our hard-earned trust in the pleasure of life.

Today is cool for July 3rd, but sunny. In a while folks will head to the beach, forming a steady stream parading past our front porch. Tonight there will be picnics, friends, and fireworks. Maybe we will get in some garden time, perhaps even a kayak, before then. With luck the day will be a celebration of domesticity, leisure, and play, a break in the day-to-day of work and responsibility. I hope that you, wherever you may be, are granted a day of grace and ease, comfort and joy.

3 thoughts on “The Ease of Summer Light”