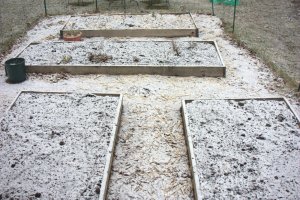 We were up early yesterday to join our friend Alicia, and about a dozen others, for a walk in the woods. Saturday evening the forecast had called for snow, turning to rain about the time we were to meet in the park parking lot. We awoke to gray skies and chill, but no snow, conditions for which we were grateful. We had snow earlier in the week, the soft snow that covers newly prepared gardens and, here in Vermont, is dubbed “fertilizer”.

The walk was advertised as a search for wildflowers and birds. The weather mitigated against hearing or seeing a wide variety of

birds, and it is a bit early for some wildflowers, so I looked at the event as an opportunity to socialize and to get out into a park, which although near our home, I seldom venture into. Oddly, I used to work across the street from the park, and walked in it several times each week.

I wore my new full-leg brace, knowing there would be parts of the walk I could not negotiate. I guessed the cold and damp would serve to shorten my participation as well. In spite of this, I joined the others as they set off up the hill.

Soon we came to the side trail that heads up steeply towards the top of the hill, where a tower looks out across the lake and Adirondacks. We stopped to watch a pair of wood ducks who appeared to be nesting there. This was tricky business, as wood ducks are somewhat private, and we did not want our largish pod of predators to frighten them. The birds were in the trees somewhat further up the hill, back-lit by the sullen sky, and we could only imagine the brightly colored feather patterns that distinguish these beautiful animals. Still, finding wood ducks in this park was a rare, and happily greeted, event!

After a brief consultation, I decided to continue along the lower trail while everyone else took the high road to the tower. The idea was to meet again the next time the two trails intersected. We all anticipated the trip up the hill would be relatively brief, so I set off towards the rendezvous point.

I meandered along the trail, stopping frequently to inspect wildflowers growing in the ledges that abut the path, and to listen to the few bird calls coming from the woods and the nearby yards of houses. The wildflowers, as has been the case the last few years, appeared to be blooming in a somewhat random fashion, with earlier season, and a few late season, flowers nodding side by side. There can be little doubt that climate change has affected them.

As I walked along, raindrops splattered here and there around me, deepening the chill. Predictably, I was the first to arrive at the meeting place. I looked at the path that cut its way down from the hill’s crest, and was grateful I had chosen not to walk it. There was simply no way I would have managed to get down; it was simply too steep and rocky. Figuring the others would be along soon, I settled into waiting and listening, a state I deeply enjoy.

Time passed, the rain began to pick up, and my companions did not materialize. By this time I had been on my feet for about an hour-and-a-half, and they, and my hands that

have to manage crutches, were complaining. It was time to leave. I called Jennie’s cell and received her voicemail; her phone was dead and at home! I worked my way back down the path, hoping to spot the group as they made their way along the crest of the hill. Nope.

The rain was picking up, although it remained far from soaking, and my hands were achy and cold, so I headed back to the parking lot. About halfway down the path my cell rang. The group had made it to the meeting place, and Jennie was calling to make sure I was OK. I was, and encouraged them to continue along their way.

Sometimes things just do not go as planned. This time, I was left feeling good about the morning; after all, I had social time, alone time in nature, and exercise! Not a bad way to begin a rainy, cold day.

Eventually, Jennie made it home, chilled to the bone, and happy with her adventure. We built a fire in the wood stove, took the chill from the house, and settled into a long

afternoon by the fireside. It was a lovely day!

Thanks to Jennie who took most of the photos!

4 thoughts on “A Lovely Day”