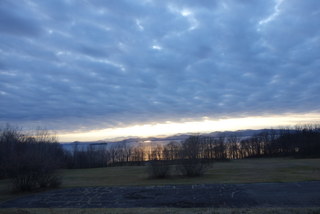 Last night we watched a profound video about the Native American (Chippewa) artist, George Morrison. Jennie had given me the most recent book about his work at Christmas. We had also seen some of his work at the Eiteljorg Museum in Indianapolis.

Morrison’s art is thoroughly modernist, his paintings weaving together color-field, Surrealism, and, at times, minimalism; his sculpture tends to the minimal. At the same time, he manages to bring in traditional Chippewa mythology and visual imagery, his beloved Lake Superior, and elements of autobiographical narrative. Much of his work is breathtakingly beautiful, transporting the viewer to landscapes of the heart and spirit.

Looking at his art, I am reminded of days spent at the ocean in Maine, and foggy days here on Lake Champlain. Much of his painting, and many of his wood constructions, reference the horizon line that demarcates water and sky. That space between (ambiguous, dangerous, liminal) is the home of the mythic and the transformative. It is the realm of the imaginal, a place were the truth is lightly held, where “reality” morphs and drips between the fingers. It is the landscape of story, populated by the lake monsters that create storms, and the Thunder beings who drive the seasons and change our lives. Perhaps the Ancestors dwell there, too, hovering just on the horizon.

I like to imagine he uses the horizon as a metaphor, his work situated on that thin line where two cultures meet, and reflecting the lived experience of many of us. He studied in New York and Paris, and, before moving home to his beloved Minnesota, showed with the Abstract Expressions. His work was quintessentially Native, even Chippewa, even as it was deeply rooted in the New York school modernism. His art also subtly, quietly, references his nearly lifelong disability and illness. As a teacher he touched the lives of a great many people, artists and non. As an artist he opened the doors of the art word to Native Artists who chose to work in the modernist tradition without giving up their cultures.

George Morrison danced joyfully on the edge, and invited us to dance with him. I hope you will take a moment and look at his work.

8 thoughts on “Dancing Between Cultures: The Art of George Morrison”