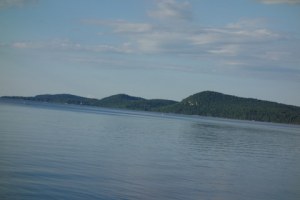 We’ve been fretting about the state of the world. The other evening we put those worries aside and kayaked on the lake. We were at Sand Bar State Park, a lovely sandy beach with hills running into the lake on the north and south. Those hills used to be mountains, perhaps taller than the Himalayas are now.

The hills are rocky and tree covered. Twelve thousand years ago or so they were barren, having been scraped clean by Ice Age glaciers. Traditional people would have followed the retreating glaciers, so probably arrived in what’s now Vermont about then. By the time Europeans arrived, the dense forests of New England would have appeared to have been here forever.

At the beach we joined quite a few other people who were picnicking, swimming, and boating. Fair weather clouds gathered and bloomed in the 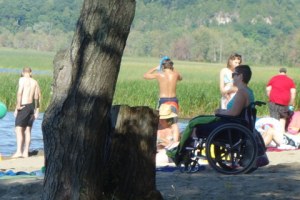 I went out for a brief paddle. Jennie’s kayak was a joy, responding immediately to each stroke, stable, and gliding easily through the choppy water. It took no time at all to get out far enough from the shore to escape the joyful hubbub. There, in the open water, the breeze was stiff and the word a deep Mediterranean blue. The kayak being very steady, I took a few moments to just float and sing to the clouds, sky, hills, and lake. Even though my mind was chattering along, their response came sure and clear. I had a brief vision of the landscape stripped of every bit of life, save a sparse scattering of lichen. Slowly the trees and other vegetation returned, was reduced again as the European settlers clear cut the hills, then regrew. A voice spoke from somewhere inside, saying, “You see. You worry about the future because you are a human and have a short view of things. Life is resilient and 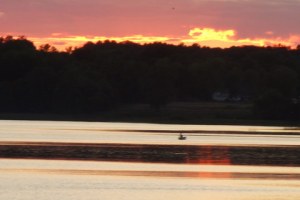 insistent. The current cataclysm is not the first; always life returns, and will do so till the planet dies. It is best to take the long view, a very difficult thing to do in your time of the instantaneous. So take heart and do what you can, even as you grieve. ”

All this happened in maybe ten seconds, although I pondered it for a while before heading back in to shore. The sunset that followed a couple of hours 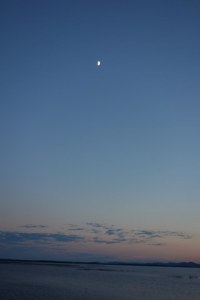 later seemed to repeat the theme: we humans, too, are transient here, the graced recipients of the world’s splendor and beauty. Best to stop, enjoy, and wonder.