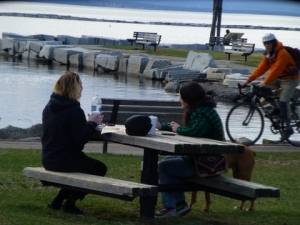 Last evening I went for a walk along the lake. It was chilly and there had been snow earlier in the higher elevations. Still, a few people were out, some with their dogs. This morning dogs, and their people, were out in force. Spring must truly have arrived! (I just looked out the window and noticed a large raptor circling while being harassed by the inevitable smaller songbird.)

I’ve been noticing how human I am. Even though I am in my late sixties, spring brings out the younger man in me. As the weather warms I become more playful, get out and about more, and begin to notice other people. As a result, I am reminded that I am a primate, biologically hard-wired to be social. Dogs, while not primates, are similarly wired. They can tell when one enjoys their presence, and will often, with the permission of their owners, reach out to make contact. For us humans, to take a dog, or a baby, out for a walk is to invite social interaction with others.

The quality and extent of one’s social networks is a very good predictor of future health and wellbeing. These markers are also useful in predicting our response to illness and misfortune. Thus, one of the most insidious effects of trauma is social isolation. When the trauma occurs early in life, and especially if it continues over an extended period, the survivor may easily find herself or himself profoundly alone as a child, and later, an adult. This isolation is driven by fear, and, too often, intense self loathing.

In Native American cultures children were traditionally taught stories that modeled social engagement, connection, and resilience. The heroes and heroines of these stories utilized their connections to the spirit world, the Natural world, and the tribal community to remain resilient in the face of terrible suffering.  The stories were themselves embedded and anchored in small communities that tended to intervene on behalf of children who were in distress. Such stories surely aided children and adults when adversity entered their lives.

Sadly, the impacts of colonization, especially war, alcohol, and introduced diseases, fragmented both communities and their story sharing traditions. Forced assimilation and, crucially, the theft of children, and their subsequent forced attendance at boarding schools, further weakened the social and storied safety net. Although the boarding schools are, thankfully, in our past, their legacy, and may of the forces of colonialism, continue to influence the lives of Indian children, as evidenced by the tsunami of youth suicides in Indian country.

Traditionally, stories were owned by individuals, families, or tribes, and, to a considerable extent, this remains true. Ordinarily one asks the owner for permission to tell a story. That convention has largely been ignored by folklorists and others who have collected, and published, Indian stories. This has resulted in massive cultural theft, yet it has also given us a deep reservoir of traditional stories, many of which seek to remind the listener they posses rich inner resources and the capacity to be resilient. For those of us who have largely lost our Native heritage, these collections of stories are an enormously important resource.

There are similar resources in the European tradition, and I have, throughout my career, used stories from the Brothers Grimm in clinical settings. I have, in doing so, sought out the earliest available versions of these stories, versions rich and raw, and thoroughly human. Often, clients are surprised that narratives of such descriptive power could lie beneath stories made popular by Disney. Yet, these European folk stories almost always lack the sense of belonging and community so fundamental to their Indian relatives. I wonder whether the sheer destructive power of European history had already created cultures of relative isolation by the time the Grimms collected the stories.

I was taught early on that stories are powerful healers, and that sharing traditional stories offers to clients the possibility of a harbor, and safe anchorage, for their lives. I have come to believe that Narrative Therapy, while potent, is often insufficient, as it may fail, when used alone, to embed persons in the life affirming web of tradition and community. Repeatedly, I am reminded here is something profoundly healing about traditional stories, narratives that invite us to recognize our plight, no matter how harsh, as inherently human.

What stories have offered you solace and healing?

23 thoughts on “Resilience and Story”