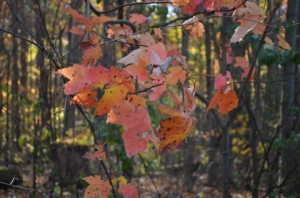 November is Native American Heritage Month and deer season. There are innumerable resources on the web if you want to learn more about Native America, and lots of old timers about who will tell you stories of deer camp.

Today is a stereotypical New England November day, overcast, damp, and chilly. Being the end of November, and sure enough the conversation in cafes and pubs throughout Vermont has turned to deer hunting and Thanksgiving. Not much mention of Native American Heritage Month though.

Vermont has been home to a subsistence economy throughout its human history. Our climate has often been unkind to farming, although one might grow abundant crops in a good year. Climate change has lengthened our growing season considerably; if one can avoid the new cycle of flood and drought, and the new insects, one can do pretty well most years. Anyway, people have long needed to hunt and fish to supplement whatever crops they could grow. Deer,moose, turkey, and grouse have long been crucial to the subsistence diet. Many people in Vermont still hunt as a subsistence necessity; many others do so as a treasured family tradition. Deer camp even trumps Thanksgiving dinner.

Our deer population rises and falls with the weather, harsh winters typically reducing the deer herd significantly. Gone are the wolves and cougar, although there are sightings now and then. Coyotes have taken over much of their range, but it appears they are not particularly efficient predators on deer and moose. This time of year the deer are likely to be headed down to lower, less snow clogged elevations, closer to human habitation, making hunting a tad easier. While turkey has come to symbolize Thanksgiving in American mythology, it seems likely to me that those late November feasts held by the local Indigenous people most likely featured deer, perhaps a little easier to shoot and able to feed several people.

The area around Burlington was decidedly multitribal in use and often contested; hunting and fishing territories were tightly held. Mostly tribes appear to have stayed apart except to trade, and occasionally fight. It seems likely the area was rich in ideas and trade goods, although the flow of genetic information may have been more limited.

Native America is blessed with a staggering diversity of cultures. In some a fellow does not speak to his mother-in-law. In others it is considered rude to ask a direct question. Some tribal languages, being verb driven, lack nouns. A few cultures had constitutions and/or monetary exchange systems before contact with Europeans. (The US constitution is based on the Iroquois Confederacy.) Some peoples sprang from the Earth near where they live, others tell long stories of multiple migrations. Yet others arrived from distant galaxies. Some cultures are based in nomadic traditions, others are farmers or herders. Some had no concept for warfare, while others were warriors and raiders. Of course, most folks don’t know this, as the media prefer to acknowledge a few tribes over the many.

That same media often ignores the simple truth that before contact with Europeans we Indians lived coast-to-coast, occupying every ecotone from lush to arid. Mostly we lived simply, although some agricultural societies took a decidedly urban turn. Unlike many of the settlers who overran our lands, before contact our ancestors lived long, socially engaged, self-directed lives. Times could be hard; sometimes people starved. Yet life was seen as good, folks shared what they had, and the people regularity gave thanks to the Creator. We also took careful note of the ways of Nature, understanding ourselves to be part of something vast, complex, and beautiful. Occasionally people would forget this and do things that harmed the environment; usually harsh consequences followed.

Initially many tribes welcomed solitary Europeans into their midst. Yet contact brought many problems and our numbers plummeted. As a result many tribes welcomed Europeans into their desperately ranks. Rape and slavery added to the complexity of the gene pool. As a result of all of this, those of us from the Eastern half of the U.S. often appear quite European. Some of us even have blue eyes and blond hair, although that is often blamed on the Vikings. Something similar occurred in the Southwest.

With Thanksgiving rapidly approaching this is a good time to learn about Native America. My favorite book on our history is Thomas King’s The Inconvenient Indian. It is a hilarious, heartbreaking journey through North American history. Oh, and by the way, he just won the Canadian Book Award for his new work of fiction, The Back of the Turtle!