Yesterday morning we visited Peggy’s Cove, a lovely, tourist saturated fishing village southeast of Halifax. Like most of Atlantic Canada, tourism is essential to the economic life of the village. Looking about, I came to realize that during the summer tourists vastly outnumber residents, although most tourists are in the village for a few hours at most.

In spite of the dramatic influx of others, the residents of the village remain remarkably warm and engaging. They do so even as tourists swarm over every inch of the village, seemingly making privacy impossible. Given the challenge of making a living in Atlantic Canada, I imagine the folks of Peggy Cove are grateful for the income generated by tourism, even as they are likely relieved at the end of the season. 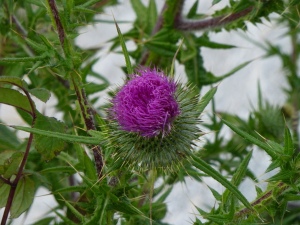 As I wondered through the village I found this thistle growing between rocks. Looking at it, I found myself imagining the community of Peggy’s Cove is a lot like that thistle. The people here somehow create a living in beautiful, if thinly resourced environs. They do so generation after generation, although there is always the possibility that the next generation will leave in search of an easier life elsewhere.

The same seems to be true of many of Nova Scotia’s Mi’ Kmaq communities. The land is beautiful and life can be hard. Many communities face dramatically high unemployment rates and deep poverty. Hopelessness is often near at hand, as is the possibility that the next generation will leave both the community and the Nation. Even so, The People continue.

During this trip we have had the opportunity of seeing the art produced by a number of Mi” Kmaq artists. Their work is engaging, beautiful, demanding, and often, confrontational. The works they produce embrace both traditional culture and Western pictorial traditions. Some of the very best of this work takes traditional crafts and transforms them into art. These artists and craftspeople are acutely aware of the differences between arts and crafts, and play with the boundaries, often creating work that lives in both realms at once.

Perhaps the people of Peggy’s Cove and the Mi’Kmaq reserves are more similar than they imagine. They are, like the thistle, seeking a way forward in a challenging environment. I imagine they are hoping to hold on to that which has fed their people for many generations while creating lives that offer hope and new opportunity.  Along the way they may learn to play with the boundaries, creating lives and art that thrive in difficult conditions, offer hope for the future, and restore community.