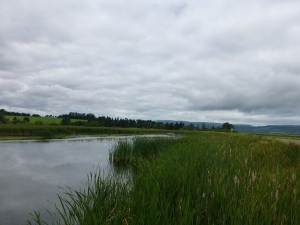 Jennie and I are on retreat in Nova Scotia. As I write, water laps gently against the deck some fifteen feet from the sitting room door. Evenings last long, as we are in Cape Breton and in high summer. A few tardy boats are make their way to the nearby dock in the growing twilight. An as yet untouched plate of freshly baked cookies sits on the coffee table.

Across the road is a marsh. Earlier today we sat on the hill high above the marsh, watching the local eagles fish the shallow waters. This evening the open water was alive with ducks and a great blue heron. A beaver lodge sits, mostly hidden in the high reeds.

A few days ago we were in Sackville, New Brunswick, home of a truly fine waterfowl park. The park is crisscrossed by hundreds of meters of boardwalk. As we entered the park a mother duck barred our progress along the boardwalk. We waited. One young one appeared from the tall grass. A second followed, then a third, and a fourth. The parade continued, joined at the end by another adult female. When all had passed safely cross the boardwalk and into the lake, we were finally allowed to pass. 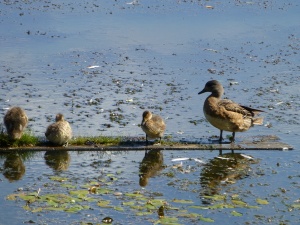 As we made our way through the marsh we met other walkers. Each offered a warm”Good day.” Some stopped to chat for a moment. One woman told us of her forty year acquaintance with the marsh. Over that time the marsh had been a place of love and loss, continuity, and now of great comfort.

Twilight has faded almost into night. The water is still.

Marshes are profoundly fertile ecosystems. This is particularly true of salt marshes. Native people understood this, and valued the marsh as a reliable source of food and much-needed fibers.

The European colonists often drained  marshes, converting them to rich agricultural regions. The Acadians reclaimed much land between Sackville and Amherst, then were driven out by the British, who maintained the dykes and canals that created tillable land. Today the windmills that once dotted the landscape have been replaced by enormous wind turbines.

Yet Pachamama has her own plans for the land.  Storms over the past few years have destroyed some of the dykes and marsh has reappeared in the landscape. The encroaching saltwater has led to the abandonment of a few farms. As the people leave the wildlife returns.

As we drove across the reclaimed marshlands I thought about the progression of peoples across the landscape. The Mi’ Kmaq people were living from the land when the French arrived. The two peoples mostly got along well and intermarried. When the British came, there was a period of coexistence with the French Arcadians, although perhaps not so much so with the Native people. With the expulsion of the Acadians, British law and culture came to dominate the area, and remained dominant until quite recently, when the descendents of the Acadian settlers began to come out of hiding. Now New Brunswick is officially bi-lingual.

As we drove across the expanses of flat, fertile farmlands which make up the Tantramar Marshes, I imagined the Acadian people looking back in sorrow towards their vacated farms. Perhaps they witnessed English speaking families already moving into houses that were once their homes, just as my Cherokee ancestors did when they were forced from their homes and farms in the Carolinas, over a hundred and fifty years ago.

Perhaps this fluctuating tide of peoples is innate to the human experience of the land. If so, can we learn to make do with what we  have, rather than taking from others? Can we develop the skill to read the history embedded in place, the love and the suffering, and remember that we, too, are vulnerable?

Darkness has fallen. The lake and marsh are still. If we could see, we might notice the territory that belonged to herons and eagles by day, has changed hands. We might hear the call of the owl as she draws out her prey. We might catch a glimpse of other night movers, predictors and prey. Predator and prey, Mi’ Kmaq and English, joy and sorrow are ultimately inseparable.The land and the marsh are alive; Pachamama is alive. What JOY to be aware and engaged in that life! How marvelous to remember that we are inseparable from Pachamama!

In the night loons call to one another across the lake.

2 thoughts on “Joy and the Marsh”