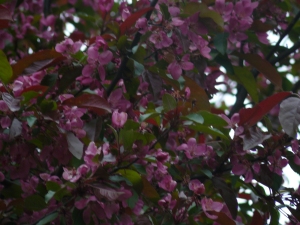 In the last installment of this story, a friend and I were breakfasting in a restaurant when Coyote appeared, told a humorous story, and performed a healing for my friend.  The story continues:

Coyote looked at my friend. “Well done, don’t you think?” he said. He was looking pretty proud of himself.

He peered over at me, and raised his leg again. ” That table sure has beautiful, tall, slim legs” he sighed wistfully, rubbing himself against a table leg.

“Your blog’s been a bit somber recently,” he said, slowly lowering his keg. “Your readers must be leaving in droves.”

“No, just a few. The problem is things keep getting worse for the World and for Native peoples, but no one wants to  think about the history that created this mess, or even how it affects EVERYONE.”

“Maybe you should write about The Rapture. People won’t know your writing about the time to come when all the White people will be magically drawn into the sky and returned to Europe. What a day that’s going to be! People will like it if you write about uplifting topics like that.”

“When do you think that’s gonna happen,” I asked.

“Sometime in my lifetime.” he responded.

“You’re immortal,” I pointed out. Besides, I’m at least half White. What happens to all us Mixed Bloods?”  “Yah, I can see your point,” was his response. “Maybe you should all get together and build an Ark. Maybe you could talk with Turtle about creating a place for you.”

“So what should I do about the blog,” Inquired. I had grown tired of the conversation. I love Coyote but talking to him can be exhausting.

“I could take this table home with me. She’s a keeper,” he purred.