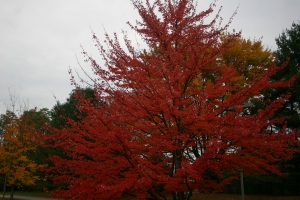 We have entered late Autumn. A few trees have lost their leaves. Others, although a small minority, remain green. Scattered clusters of rich, bright color remain.The tourists have mostly gone home.

Here, in Vermont, late Autumn is chilly, damp, and profoundly gray. The wind blows alternately from the northwest and southwest. Occasionally rain or snow storms come in from the northeast, portending Winter.

This winter promises to be difficult for many Vermonters. Food and fuel aid have been reduced at the Federal level, and the state lacks sufficient funds to make up the difference. In a cold, rural state such as Vermont, families struggle when fuel costs and unemployment are high. Families and elders often bear the brunt of the suffering. Additionally , many people continue to be profoundly affected by this summer’s floods.

Vermonters have traditionally seen themselves as both ruggedly self reliant and doggedly committed to community. These sometimes conflicting positions have created a checkerboard of high and low times in Vermont history. The forced sterilization of Native and other poor women, and persons with disabilities, as part of the state’s robust eugenics movement in the Twenties and Thirties was certainly a low point. Vermonters’ response to this past summer’s floods was a crest.

Out of these two periods in Vermont history have come many stories. They are nested in larger stories told and contested at the national, and even international level.  In our current lives and collective history, many of these stories blame, isolate, and demean those who lack abundant resources. Yet, there are few stories, and voices, offering compelling counter narratives to the preferred cultural beliefs.

I like to think that both traditional Native American forms of healing, and good psychotherapy, challenge these oppressive cultural stories. Michael White wrote about the ways effective psychotherapy challenges negating expressions of globalizing ideology.

This understanding of narrative as a cultural vehicle is featured in therapeutic conversations that unpack the stories of people’s lives and identities. Not only does this unpacking contribute to the deconstruction of the negative identity conclusions associated with these stories, but it also renders more visible the modes of life and thought that are carried in these stories, the historical and cultural ways of being in the world that these stories are the bearers of . These therapeutic practices bring the world into therapy in the sense that many routine and unquestioned understandings about life and ways of living become visible as cultural and historical products, and these are no longer accepted as certainties about life or truths about human nature and identity. (Narrative Practice: Continuing the Conversations, Michael White, page 8; published by Norton, 2011.)

As Autumn slowly moves into Winter, I hope that our consulting room reflects our deepening practice of redemptive story making, and the warmth of acceptance and deep sharing chip begin to sooth wounds old and new, and warm the icy heart of greed and indifference.