I was raised to think of stories as many layered and rich in meaning. My father told stories using metaphors from the garden. He knew that vegetables are best grown with minimal chemical support. Such vegetables taste better, but they may show the scars of their development. During the growing season Dad was out in the garden before most teaching moments. Whether illustrating a Biblical lesson, or just swapping tales with neighbors, the garden and its fruits provided the  metaphors he lived and  taught by. Often, the subjects of his stories were tomatoes.

First Nations storytelling relies on metaphors. We know stories may be true, even though they are fictive, or false, even though they are factual. Some stories contain concrete facts but are really lies. Stories, in First Nation traditions, carry culture, history, and a strong moral sense. They are beacons in the fog, rudders in heavy seas.  Frequently, our stories are funny, even ribald. Always they point to rich earth, inviting us to send our roots down deep into the Pachamama for sustenance and healing.

Healing arises, in part, from discovering the power of the stories we share, tell ourselves, and live by. So often, focused conversations turn up previously unrecognized pathways toward meaning. These paths may be broad, or, more likely, overgrown and difficult to discern. Frequently they demand we relax our insistence on one interpretation. Yet followed, they lead to insight, opportunity, and often, wonder. Eventually, stories followed with care, thoughtfulness, and courage often lead us to healing, and the sacred. 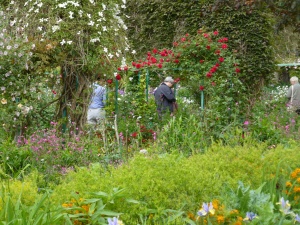 Ritual and ceremony are also about story. When I recount a shamanic journey, send a prayer to the Spirits on someone’s behalf, or  make a medicine bundle to aid a client’s healing, I am also telling stories. These stories are about connection, the vast healing resources within and around us, and the possibility of healing, with or without a cure. I am telling stories about the deeply held connection between each of us and Nature,  and about the sacredness of the moment, the body, and our lives.

My Father struggled, as does each of us, with his demons. He hid his heritage. He was often, I think lonely. He was always ready to listen to, or watch a baseball game. He loved the garden. From all this he borrowed to make stories. He made sure I was watching.

My Father believed in the healing power of story. He did not take much literally, preferring to acknowledge the ancient wisdom and power of metaphor and lived experience to heal deeply. Most people did not recognize the savvy sophistication of his home-grown tales. Those that did, entered worlds of enchantment and change, worlds where all life is sacred, and where healing grows on vines in the garden.

On my alter, my mesa, is a tiny bowl filled with charcoal from a ceremonial fire that took place years ago. People stood around that fire, honoring Fire as a conscious  force in our daily lives. These people, shamans, their students, and medicine people, held hands and danced into the mosquito filled night. Some told stories about the healing powers of that great element. When the flames burned down, and the embers cooled, we were each invited to carry charcoal home with us.

When I see the charcoal sitting on the mesa I am reminded of that night, and those people, some no longer physically with us. Then the air is filled with singing voices, laughter, and story. I remember the warmth and light of the flames,  and I am reminded yet again that healing is always nearby. I think my Father would appreciate that.

3 thoughts on “Thinking about Healing Stories”